Boone is proud to announce the addition of Taylor Yozwiak, Director of Percussion Studies.  He is eager to get started with our students during band camp.  Below we have included a short bio of his experiences.  He comes to us with a wealth of knowledge and connections in the percussion world to continue building our jazz and percussion programs. 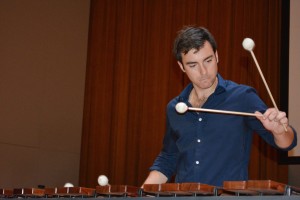 Taylor Yozwiak is an aspiring percussion performer, educator, and arranger

Taylor received his Bachelor of Music Degree in Percussion Performance from the University of Massachusetts in 2013. While at UMass, Taylor had the privilege of studying with professors Ayano Kataoka and Thomas Hannum. Through his studies and experience at UMass, Taylor began to develop his own unique perspective on percussion, striving to combine his marching and rudimental background with his passion for solo, classical, and chamber percussion music.

Throughout his percussion career, Taylor has won numerous awards for outstanding musicianship. These awards include the 2012 Vic Firth Scholarship, the Chancellor’s talent in the Arts Scholarship from the University of Massachusetts, and the “Semper Fidelis” award for Musical Excellence presented by the Marine Corps League. During his two years as the Timpanist for the Cadets Drum and Bugle Corps, Taylor won a World Championship with the Corps in 2011 and was awarded the Cadets Distinguished service award in 2012. Most recently, Taylor was a prize winning soloist in the 2015 Atlanta Modern Snare Drum Competition and was honored to be featured as a Vic Firth artist and educator.

Over the past several years, Taylor has led and arranged for programs at the high school and collegiate level in Maryland, Connecticut, Massachusetts, and Florida. These programs include the University of New Haven Chargers Marching Band, Mount Holyoke College, and The University of Miami. Taylor is also in his fourth year as a percussion staff member with the Cadets Drum and Bugle corps. During Taylor’s first year as a Cadet staff member, the Cadets Percussion section won the Fred Sanford trophy for high percussion performance.

Most recently, Taylor completed his Master’s In Music from the Frost School of Music at the University of Miami. During this time, Taylor studied with world-renowned percussionist Svet Stoyanov, directed the “Frost Band of the Hour” Drumline, and performed throughout the rich musical scene in Miami. While maintaining an active performance schedule throughout central and southern Florida, Taylor is excited to begin his next musical journey as the Assistant Band Director and Director of Percussion Studies at William R. Boone High School in Orlando