Tagged with " A Midsummer Night’s Dream"

Lovers, asses, and fools—you know, everything you become when you fall in love. Salty language and adult themes ahead. Proceed with caution.

Artist Mya Gosling’s Peace, Good Tickle Brain online is a treasure trove of Shakespeare-related fun, including three-panel cartoons for a number of the plays. Here’s her cartoon for A Midsummer Night’s Dream:

Her version of Midsummer with Star Wars action figures is a hoot. What happens when Luke, Leia, Han, Chewie, Darth Vader, C-3PO, Yoda, and even Emperor Palpatine become the “Rude Galacticals”? It starts here. 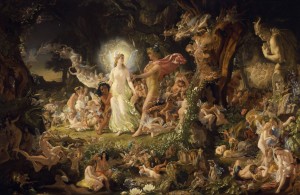 Shakespeare borrowed from novels, older plays, history, mythology, and other sources. His plays are typically divided into three groups: histories, comedies, and tragedies. Some scholars include his later plays, like Cymbeline and The Tempest, in a group called the romances. Shakespeare comedies exemplify various types: The Comedy of Errors, The Taming of the Shrew, and The Merry Wives of Windsor (farce); A Midsummer Night’s Dream, As You Like It, Much Ado About Nothing, and Twelfth Night (romantic comedies); All’s Well That Ends Well, Measure for Measure, and Troilus and Cressida (dark comedies).

A Midsummer Night’s Dream, first performed about 1594, is where Shakespeare as an artist begins to emerge. The play combines a number of comedic elements, from the farcical actions of the “rude mechanicals” and their play-within-a-play to the rich language of the lovers, elevating the comedy into something different. The mystery of the forest setting and the various moods provide a base for future comedies, where more finely drawn and developed characters like Rosalind of As You Like It, Portia and Shylock of The Merchant of Venice, and the twins Sebastian and Olivia of Twelfth Night take important roles.

A Midsummer Night’s Dream is a good way to kick off our study of Shakespeare because within its boundaries, we see many Shakespearean play characteristics brought to life, like the parallel worlds of the city and the forest, mirrored characters like Theseus/Hippolyta and Oberon/Titania, and the contrasts between upper- and lower-class characters. These differences are found primarily in language level and style; the rulers and lovers speak poetically and beautifully, but the rustics from the lower classes have speech that is rougher and less rhythmic. Humor is found in wit (upper), farce (upper and lower), and downright bawdy language (lower). These shadings highlight the appeal that Shakespeare’s works had for all levels of the theater-mad Elizabethan society.

As you read, be on the lookout for a few of Shakespeare’s most famous lines, such as “The course of true love never did run smooth” and “Lord, what fools these mortals be!”

As with most Shakespeare plays, filmed versions abound. Of special note are the 1968 Peter Hall-directed version (young and gorgeous Diana Rigg and Helen Mirren play Helena and Hermia, with the inimitable Judi Dench as Titania) and the 1999 Michael Hoffman production starring Kevin Kline, Michelle Pfieffer, Rupert Everett, and Stanley Tucci in a memorable performance as Puck. The 2002 film A Midsummer Night’s Rave transports elements from the plot and several characters into L.A.’s rave scene—obviously not a true version of the play, but true to the spirit of the play, Shakespeare’s most fanciful comedy.

Illustration: The Quarrel of Oberon and Titania by Joseph Noel Paton