Here’s an example of the Thug Notes style applied to Harper Lee’s To Kill a Mockingbird. I’ll post the Thug Notes version of each work they cover that we read in class, but be warned! Salty language and adult themes ahead. Proceed with caution.

booty -the largest inanimate object that has the power to control a man’s mind.

cheerleading– throwing people and ourselves in the air, but still not considered a sport.

credit card – a magical plastic card that makes teenagers feel all-powerful and omniscient, all while secretly depriving said teens of money not yet attained.

Florida – a state enslaved by and dependent on a mouse and oranges.

gangster – a teenage male who still lives with his mother.

hair – something to be removed unless it’s on a head or part of an eyebrow.

headphones -the amazing wire that brings music to your ears but breaks at the drop of a dime.

hello – to approach a female with sexual intentions.

Instagram – the place where everyone who owns a camera is either a model or a photographer.

marriage – a reason to have a party a few years (or weeks) before you break up. Ex: Kim Kardashian.

moded – things are not going your way; to get burned.

Oscar – an award given to great actors, but not Leonardo DiCaprio.

rabbit – an animal so adorable it makes even the strongest, manliest men to act like squealing little girls.

spray tan – a spray that tricks girls into thinking they look tan but actually turns them into Oompa Loompas.

swag-males using the power of style and fashion in order to impress females.

textbook – a heavy and expensive object you receive on the first day of class and open only twice throughout the year: midterm and final exam.

vegan – a person who protests the murder of animals but eats their only food supply.

YOLO – excuse used to do something incredibly stupid.

If you were absent on Friday, February 28, complete either the odd or even number quotations.

1.
Out, damned spot! Out, I say!…Yet who would have thought the old man to have had so much blood in him?

2.
Those he commands move only in command,
Nothing in love. Now does he feel his title
Hang loose about him, like a giant’s robe
Upon a dwarfish thief.

3.
Were I from Dunsinane away and clear,
Profit again should hardly draw me here.

4.
Let every soldier hew him down a bough
And bear’t before him. Thereby shall we shadow
The numbers of our host, and make discovery
Err in report of us.

6.
Tyrant, show thy face!
If thou be’st slain and with no stroke of mine,
My wife and children’s ghosts will haunt me still.

8.
Despair thy charm,
And let the angel whom thou still hast served
Tell thee, Macduff was from his mother’s womb
Untimely ripped.

9.
Lay on, Macduff,
And damned be him that first cries “Hold, enough!”

10.
Hail, King I for so thou art; behold, where stands
Th’ usurper’s cursed head. The time is free. 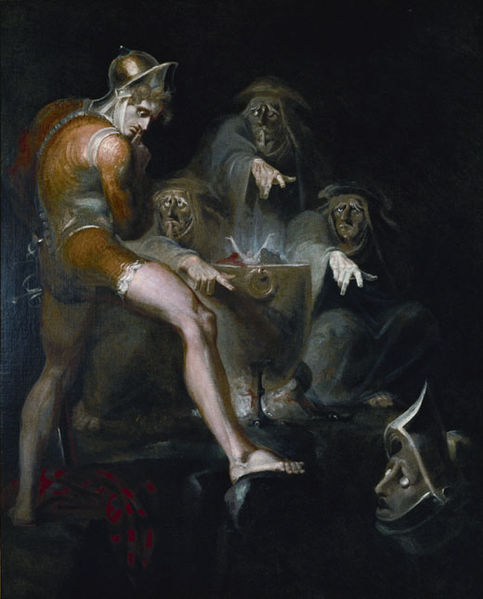 If you were absent on Wednesday, February 26, complete either the odd or even number quotations.

2.
By the pricking of my thumbs,
Something wicked this way comes.

4.
Laugh to scorn
The power of man, for none of woman born
Shall harm Macbeth.

5.
Macbeth shall never vanquished be until
Great Birnam Wood to high Dunsinane Hill
Shall come against him

6.
Horrible sight! Now I see ’tis true;
For the blood-boltered Banquo smiles upon me
And points at them for his.

7.
Wisdom? To leave his wife, to leave his babes,
His mansion and his titles, in a place
From whence himself does fly? He loves us not;

9.
My first false speaking
Was this upon myself. What I am truly,
Is thine and my poor country’s to command…

10.
All my pretty ones?
Did you say all? O hell-kite! All?
What, all my pretty chickens and their dam
At one fell swoop?

Johann Heinrich Füssli, “Macbeth consulting the Vision of the Armed Head,” before 1825. If you were absent on Wednesday, February 19, complete either the odd or even number quotations.

1.
Thou hast it now: King, Cawdor, Glamis, all,
…and I fear Thou play’dst most foully for’t.

2.
There is none but he
Whose being I do fear: and under him
My genius is rebuked, as it is said
Mark Antony’s was by Caesar.

3.
I am one, my liege,
Whom the vile blows and buffets of the world
Hath so incensed that I am reckless what
I do to spite the world.

4.
’Tis safer to be that which we destroy
Than by destruction dwell in doubtful joy.

6.
Thou canst not say I did it. Never shake
Thy gory locks at me.

7.
Shame itself!
Why do you make such faces?
When all’s done, You look but on a stool.

9.
He shall spurn fate, scorn death, and bear
His hopes ’bove wisdom, grace, and fear:

10.
Thither Macduff Is gone to pray the holy king, upon his aid…
And this report
Hath so exasperate the king that he
Prepares for some attempt of war.

Théodore Chassériau, “The Ghost of Banquo,” 1855

If you were absent on Thursday, February 13, complete either the odd or even number quotations.

1.
Is this a dagger which I see before me,
The handle toward my hand?
Come, let me clutch thee.

2.
Had he not resembled
My father as he slept, I had done’t.

3.
Methought I heard a voice cry “Sleep no more!
Macbeth does murder sleep”—the innocent sleep,
Sleep that knits up the raveled sleeve of care…

4.
This my hand will rather
The multitudinous seas incarnadine,
Making the green one red.

5.
Get on your nightgown, lest occasion call us
And show us to be watchers.

6.
What’s the business,
That such a hideous trumpet calls to parley
The sleepers of the house? Speak, speak!

8.
There’s daggers in men’s smiles; the near in blood,
The nearer bloody.

9.
Malcolm and Donalbain, the king’s two sons,
Are stol’n away and fled, which puts upon them
Suspicion of the deed.

10.
He is already named, and gone to Scone
To be invested. 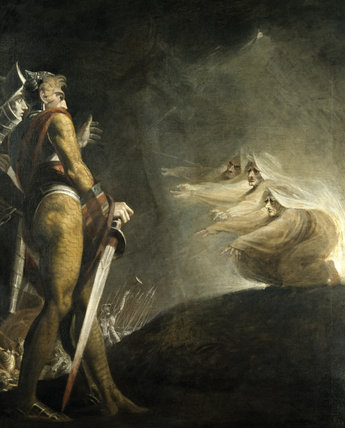 If you were absent on Friday, February 7, complete either the odd or even number quotations.

1.
Fair is foul, and foul is fair.
Hover through the fog and filthy air.

4.
If chance will have me King, why, chance may crown me,
Without my stir.

5.
…There’s no art
To find the mind’s construction in the face

6.
Yet do I fear thy nature;
It is too full o’ the milk of human kindness
To catch the nearest way.

7.
Come, you spirits
That tend on mortal thoughts, unsex me here,
And fill me, from the crown to the toe, top-full
Of direst cruelty!

8.
I have no spur
To prick the sides of my intent, but only
Vaulting ambition, which o’erleaps itself
And falls on the other—

9.
I would, while it was smiling in my face,
Have plucked my nipple from his boneless gums,
And dashed the brains out, had I so sworn as you…

10.
We fail!
But screw your courage to the sticking-place
And we’ll not fail.

This map includes all of the sites referenced in Macbeth, including the castles, towns, and battle sites. Click on the picture to enlarge. 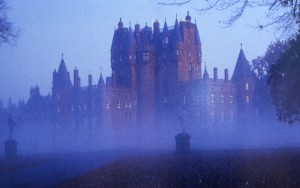 King Malcolm II of Scotland was murdered at the original Castle Glamis in 1034. None of that building survives. The building you see here was constructed in the fifteenth century. Shakespeare used the facts of the actual murder to help craft the play, although the play’s action relocates historical events to suit his dramatic purposes. 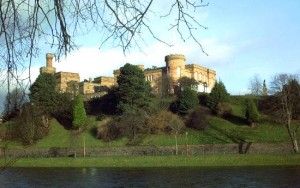 In the play, the murder of King Duncan and the subsequent action takes place at Inverness Castle. King Macbeth ruled from Inverness, but his castle was pulled down by the son of King Duncan after his death. The current structure was built in the 1800s and is in private hands.

Because Macbeth is named Thane of Cawdor, many assume that the action of the play takes place at Cawdor Castle. This building dates from the late fourteenth century. The official site for the castle has a page about its connection to Macbeth here. 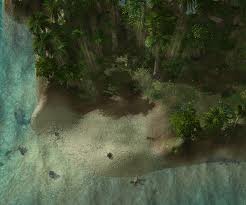 Now that we have completed our reading of Lord of the Flies, you will be submitting a college-style essay as your final assessment in lieu of a test. The objective is to reveal your knowledge of the work through your use of specific examples from the selected text to support your viewpoint.

Your analytical essay will show how Golding uses archetypes within Lord of the Flies to support the larger theme of the work.

In your essay, you will select either Ralph, Jack, Piggy, Simon, or Roger. Your essay should show, using examples from the novel, how your selected character fulfills his designated archetypal role within the novel and how that role contributes to the work’s overall theme. A good explanation of these roles may be found here. You may also refer to the Archetype_PowerPoint we referenced in class.You may also include references to other archetypal or symbolic information, such as the use of color, shape, etc. as you build your argument.

Your 500-word essay (that’s two double-spaced pages) should be submitted to Edmodo by the end of the day Wednesday, October 9. You will upload your essay to the posted assignment in .doc or .docx format. Other formats do not permit me to make annotations for your review. See me if you have submission issues.