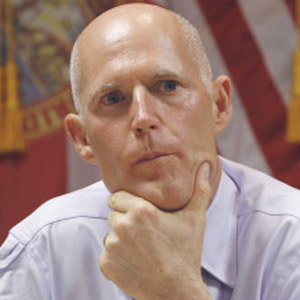 Before an eager crowd of Tea Partiers and republicans, Gov. Rick Scott announced a two-year budget plan that leaves public education and Medicaid strained. The plan attempts to make up a $3.6 billion deficit.

“I dislike the cuts. If people say kids are our future, then why take money away from something that will help them,” freshman Sydney Sang said.

The proposal also 10 percent of Florida’s public school budget, nearly $3 billion. Since Florida is already ranked 39th in per-capita spending for education, according to the June 2010 Census, democrats are left dubious of the results of the cuts, like Senate minority leader Nan Rich, D-Weston.

“The retreaded voodoo economics we heard today will not right this ship,” Weston said. “But it will drill more holes in our already badly damaged public education. It will further eliminate the life rafts hundred of thousands of Floridians have had to turn to for basic survival because their jobs, their benefits and their homes have disappeared.”

Additionally, the plan would cut $4 billion from Medicaid, a service that provides low income families with social services. The cuts would lead to a reduction in government workers. In total, the proposal cuts 8,700 government jobs including 1,700 from The Department of Corrections and other various government agencies. Also reduced are pensions for teachers, fireman and policemen, requiring employees to contribute 5 percent of their income to their pensions.

However, while Scott is attempting to save money by limiting education funding and government workers, is also cutting taxes. With total tax cuts at nearly $4 billion, the plan would include property tax cuts and a reduction of corporate taxes from 5.5 percent to 3 percent over a two year period. According to Scott, the aims of the corporate taxes are to encourage businesses to employ in Florida. However, Florida already has one of the lowest corporate taxes according to the Tax Foundation.

“Right now the government should be worrying about the people and cutting things that are too expensive for people not for big companies,” junior Dale Dominguez said.