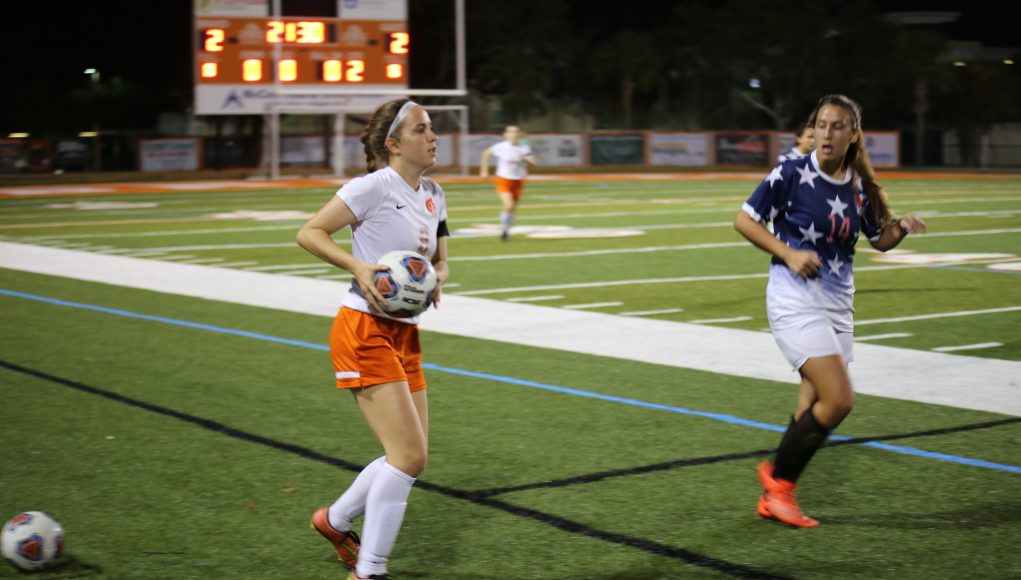 Initially, the girls exhibited a strong offense, challenging Freedom’s defense. With less than five minutes into the game, junior Cynthia Bagozzi dribbled the ball down the field to pass to freshman Heidi Wicks, the attempted goal was saved by Freedom’s goalie.

Although the team was leading a strong offense, the ball was kicked out of bounds by Freedom. Junior Alexis Tamvakris took the throw in.

Shortly after, the girls took a fast break down the field and junior Emily Riggs took a shot, but it was deflected by the Freedom goalie.

With a clean run down the field, Freedom scored the first goal of the game.

The girls made attempts to score a goal to tie the game and an offsides call was made, ensuing a free kick by Freedom. With another close shot by Freedom, senior Brenna Yokiel cleared the ball out of the box, pushing the girls down the field.

Keeping up with Freedom’s defense, Bagozzi shot and scored, tying the score 1-1.

At the first water break, the score remained tied, 1-1. Soon after the break, the girls received a corner kick, but the ball was kicked too far, ending in a goal kick for Freedom.

On the other end of the field, both Riggs and Bagozzi aim for a boot shot. However, each shot was saved by Freedom goalie. Freedom received the ball but in the midst of scoring another goal, the ball is shot out of play and Boone picks up another goal kick.

At the end of the first half, the score still remained 1-1.

With a fast and strong offense, Freedom sprinted down the field, shooting a goal but was saved by Yokie. Not too long after, Freedom recovered and scored. Boone now trailed 2-1.

In the act of blocking a shot by the Lady Braves, Freedom managed to pick up a foul, resulting in a penalty kick for the girls. Bagozzi takes the penalty kick and scored, tying the game 2-2.

After the water break, Freedom scored.

Bagozzi tried to catch up, taking a clean boot shot but the ball was out of bounds, giving Freedom a goal kick. With a failed attempt the first time, Bagozzi tried again and knocked the ball in, scoring the last goal of the night.

With less than a minute left, senior Jazmin Adlam took a shot but the ball was saved by the Freedom goalie, ending the game with a score of 3-3.

Click here to see a photo gallery from the game. The girls soccer team will face Bishop Moore (7-3-3) on Jan. 10 at Bishop Moore for their next game.