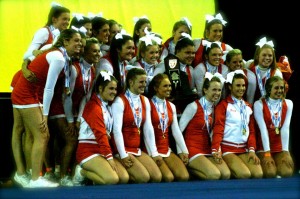 For the second year in a row, the varsity cheerleaders have kept their state title. The girls won the FHSAA’s 2A Extra-Large varsity division followed by Manatee High School in second place and Lakewood Ranch High School in third.

“This year we had a lot of obstacles to face, but we really grew as a family and supported each other through everything,” senior Brooke Dawkins said.

As Dawkins stated, the team faced hardships, which included losing two teammates due to injury, they were forced to pull up freshman flyer Tara Wolfinger, who shortly after joining varsity faced injury as well. The girls overcame these obstacles and became the only sports team in Boone history to have a back-to-back state title.

“It is really cool to have two state titles because we are the first at Boone to accomplish it,” Dawkins said. “We practiced every day, even weekends for two hours, staying overtime just to get everything in before states.”

Growing together as a team as well as a family, these girls supported each other through virtually anything. Just 16 hours before competing, senior Bethany Harper broke her nose practicing for the state competition. Not able to compete, the girls had very little time to fix and learn the new routine without one teammate.

“It was difficult not being able to compete myself, but I was so proud of them,” Harper said. “I think we left it all on the floor.”

Having dedication, effort and discipline taught these girls to never give up.

“Our team motto is when given an obstacle you have to believe that good luck will overcome bad luck,” Dawkins said.

After overcoming the obstacles they proved to be one of the best teams in school history.