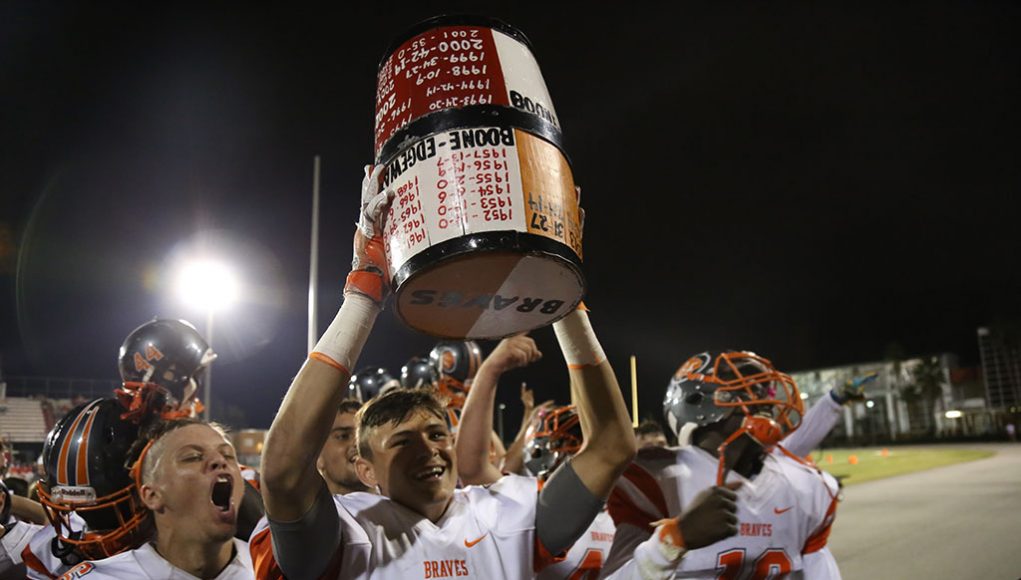 The captains met at midfield for the coin toss to begin the 65th battle of the barrel. The Boone Braves (4-4) and the Edgewater Eagles (0-9) face off was about to get underway.

The game started in explosive fashion, with senior Nikolas Deloach returning the opening kickoff 83 yards for a touchdown. Only 16 seconds into the game, the Braves led 7-0.

On the next offensive drive for the team, senior Brandon Bush cashed in on a 3-yard running touchdown. Later in the first quarter, junior Dai’One Creal scored too, this run from 13 yards out. After the first quarter, the Braves held a commanding 21-0 lead.

Early in the second quarter, junior Jaxsen Anagnostis got in on the action, launching a 34-yard touchdown pass to senior Sheldon Fox, putting the team up 28-0.

After pinning the Eagles back in their own territory, senior Jonathan Joanis stopped the Eagle running back right in his tracks and tackled him in the end zone. The safety gave the Braves two points and also the possession of the ball.

On that drive, junior Dai’One Creal had a gashing 28-yard run to bring the ball into Edgewater territory, and then a couple of plays later, he added another touchdown run to put Boone up 37-0 heading into halftime.

With such a large lead, going into the third quarter, the Braves started to rotate in some of the backups to play. Deloach made another key play, this time on the defensive side, intercepting the Edgewater quarterback after junior James Swegheimer nearly sacked him.

Before the end of the third quarter, Creal added his third touchdown of the game, strolling in for a 11-yard touchdown run. The Braves led 44-0 going into the fourth quarter.

Chewing clock through the fourth quarter, Creal took a carry to the right to cap off a dominating victory.

The Braves reclaimed the barrel after being without it for one year, and won the matchup for the fourth time in five years. Key players on offense included Anagnostis with a touchdown pass, senior Brandon Bush with a touchdown run, and Creal with three touchdown carries.

The Braves end their season with a 5-4 record, going 2-2 in their district.