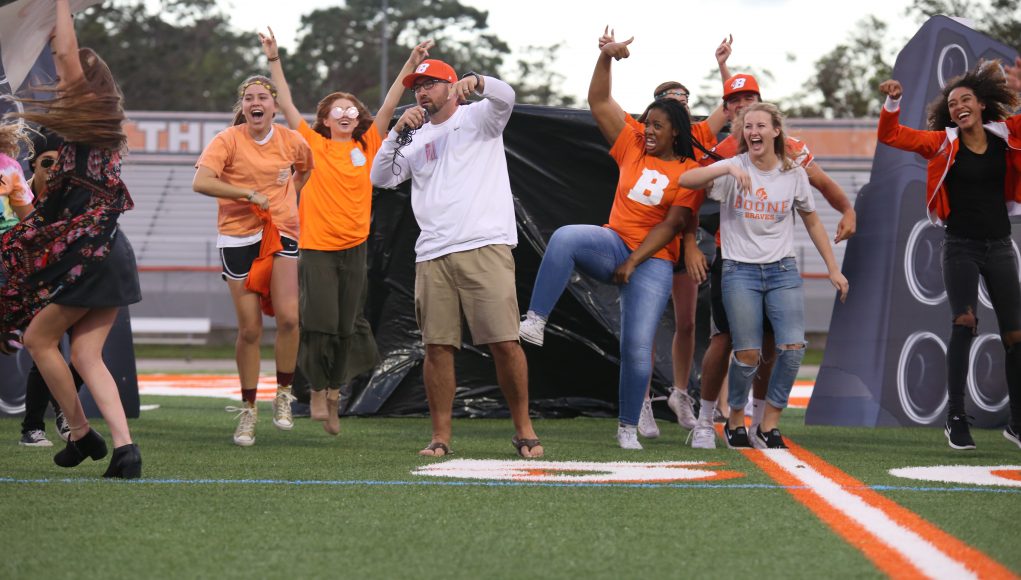 Each skit incorporated this year’s homecoming theme, Boonechella, with school spirit and creativity.

“I didn’t know what Coachella was before but the senior’s skit especially made me realize what it was. It got me really excited for all the different music that will be there,” junior Karlee Burnett said.

The performance from the senior class displayed different types of music festivals throughout the years like Lollapalooza, Woodstock and Coachella. Their goal was to find the best music to play at Boonechella. They asked all of the artists they found if they would go to the future with them. At the end, they performed the alma mater.

The varsity cheerleaders acted out a dance battle between Freedom and Boone. Freedom displayed a country-themed dance while Boone’s was modern. DJ Dusty, or Principal Dusty Johns, decided the winner.

The Bravettes also performed a skit. They used Disney characters and songs to tell a story on how they got to Boonechella.

“I love showing how much I love my school. Being able to show how much school spirit the Bravettes have, and showing all of our friends how much we love to perform was the best part,” junior Madeline Rawlings said.

In fourth place, the step team performed a skit about wanting to win homecoming tickets through a dance contest. The team thought they had no hope, but a little girl showed up and taught them how to be a successful step team. They submitted the video and won tickets to Boonechella.

Other performances from the freshman, junior, sophomore class councils, and the SGA brought light to the upcoming homecoming game against Freedom and Boone.

“We’re really excited not only because it’s homecoming but it’s also our first home game on our new turf. Not only do we have the excitement of homecoming but the feeling of the turf and players getting to play on the new turf too,” Johns said.