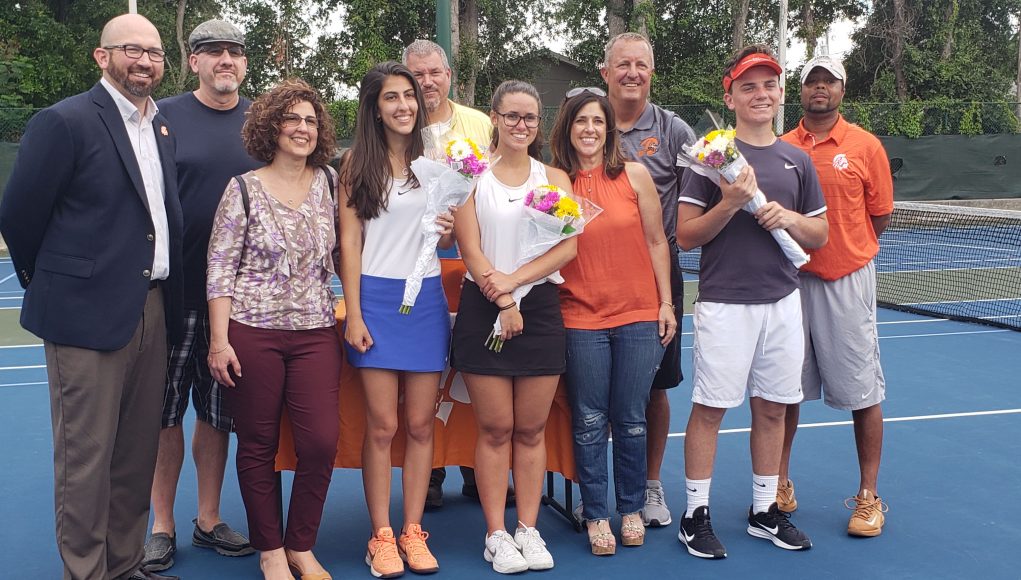 On Monday, the boys and girls tennis hosted Cornerstone for their last match of the season at the Fort Gatlin tennis courts. They also hosted senior night and recognized four seniors, Grace Blastic, Kiara Rodriguez-Ferro, Tyler Scheib and Levi Giroux.

The boys singles match started off with sophomore Kiran Ellis played the first match of the night winning the line one set 8-2. Another victory followed as junior Brandon Bartos bagels his opponent in the line two set 8-0. Just as his teammates before him, Robert McDonald won his match line three set 8-1. Senior Tyler Scheib and sophmore Caden Walker both won the line four and five set their match respectively, setting the overall score 5-0.

The girls singles match started with a brutal match. Senior Kiara Rodriguez-Ferro lost line one set 1-8. Shortly after, sophmore Lily Neusaenger won the first match of the night scoring 8-1 in the line two set. Further success came when junior Natasha Radmonovic played line 3 and won a close match with a score of 8-6. Junior Kiley Mack lost line 4 with a score of 5-4. Finally for girls singles, senior Grace Blastic lost line 3 with 1-8, setting the overall score for the Lady Braves tennis team to 2-3.

Doubles started off with a brothers brawl. Junior Brandon Bratos and sophmore Caden Walker played their younger brothers, Blake Bartos and Christian Walker. As the boys were playing, it started to rain and the match came to an end before it was finished. The coaches settled on a score to avoid finishing the match another day. The brothers match ended 8-8 (4-3). Similarly, sophomore Kiran Ellis and junior Robert McDonald ended their doubles match with a final score of 7-5 (15-30). As for girls doubles, senior Kiara Rodriguez and sophmore Lily Neusaenger lost their doubles match 1-8. Senior Gracie Blastic and junior Kylie Mack ended their game early due to the rain setting the score 3-5 (0-30).

The overall record for the match was the boys won 8-0 and the girls lost 2-4. Both teams meet back at Fort Gatlin for their district competition on April 15 and April 16.