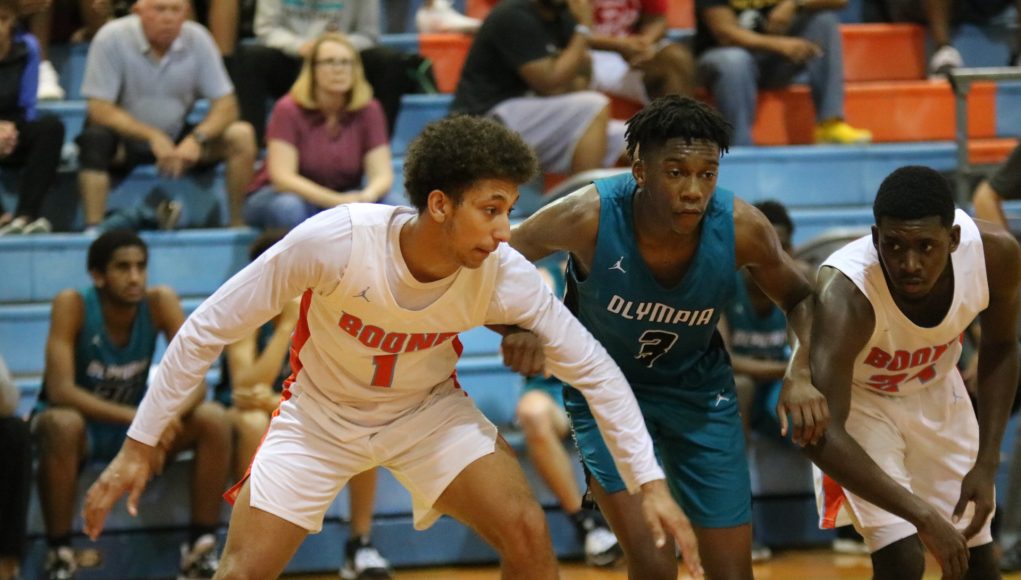 With the mission to take down the Titans, the game started at a quick pace for both teams.

To start the game, a lob pass is thrown to junior Javion Phelps as he runs down the court and scores the layup. While on a roll after the rebound is taken from the Titans, the Braves get in formation; pass the ball to Phelps who then scores the first of many threes. While on defense a shot is taken by an Olympia player, junior William Searl snatches the rebound and passes the ball to Phelps who makes another three.

With continuous back-to-back shots from both teams, junior Michael Bright Jr. sneakily slides the ball down the middle of the court to Phelps, who then dribbles it to the hoop and scores the layup. The action packed first quarter of the game contained many threes from the Braves allowing them to keep the gap in points at bay.

As the lead in points continues to grow, the Braves begin to gain confidence and the flow of the game is in place. Attempting to shoot the layup, Phelps is blocked by an Olympia player, senior Daniel Cross grabs the rebound in the air and scores. The score is now 23-15.

While on defense, senior Shukiou Sprauve steals the ball out of an Olympia players hands, the ball is then taken down the court by Phelps who shoots and scores a three.

Passing all the Olympia defenders, Cross dribbles the ball down the court and scores the layup. What started as a tight game at the end of the first half stayed tight until the final buzzer.

The inbound ball is passed to senior Matthew Kleber who then dribbles and passes the ball to Phelps who smoothly scores a layup, putting the Braves back into their rhythm.

With three minutes left in the fourth quarter, Phelps scores a much needed three, which puts the Braves on top of Olympia by one. The score is now 53-52.

The Braves have now entered crunch time, very little time is left and Olympia is back in the lead. DePryor goes up to block the ball in the Olympia player’s hand and receives a foul. Trailing by three DePryor twists mid air and makes the layup to cut Olympia’s lead by one.

At the cost of too many fouls in the final seconds, the Braves lose to the Olympia Titans. The final score is 58-62.

The next home game is Jan. 28 against Freedom.