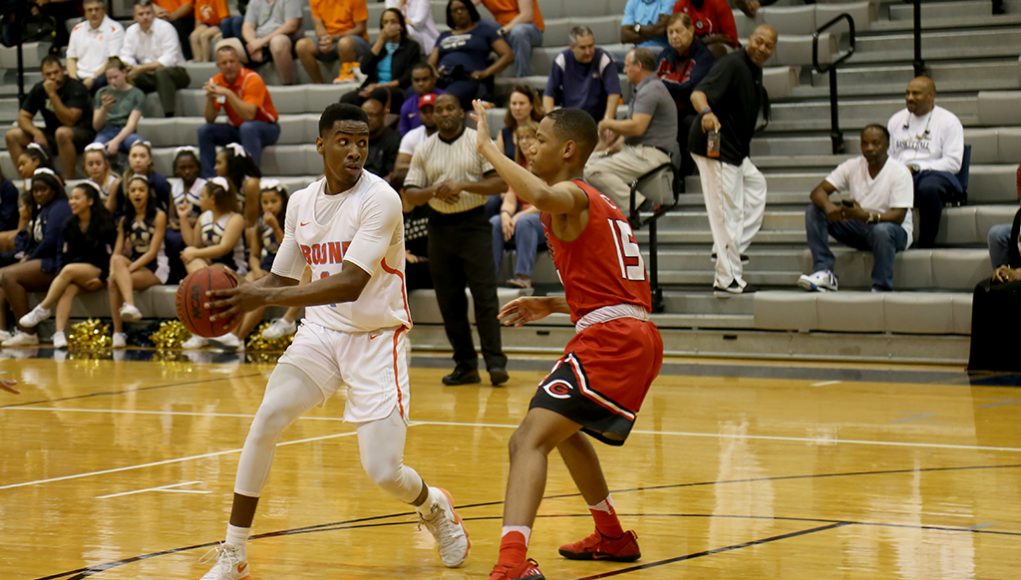 In the Class 9A District 4 boys basketball semifinal, the Boone Braves (16-11) faced off against the Colonial Grenadiers (11-16) at Lake Nona.

Two games prior to the semifinal contest, the season series between the two teams was split at 1-1. Senior Da Kevias Bracy won the opening tip-off for the Braves and junior Marlon Allen quickly converted on a layup to score the game’s first points. Allen continued his first quarter success with a contested three-pointer later on, putting the boys up, 7-5. However, after both teams traded shots and the Grenadiers drained a shot at the buzzer, Boone led 15-13 through the first quarter.

Both teams went back and forth with possession. The Braves started to extend their lead with multiple shots and a 2/2 trip to the free throw line for senior Sean Halloran. The Grenadiers battled back, though, rebounding a missed three-pointer from junior Robert Soto and picked up a shooting foul on the other end of the court. At halftime, the Braves led 23-21 in a highly defensive game.

To start the second half, Colonial quickly made a layup to tie the score for the first time in the whole game at 23-23. Boone quickly retaliated as Robert Soto led the team down an 8-0 run, making a three-pointer and a layup on consecutive possessions. Colonial battled right back with two consecutive three pointers of their own, and at the end of the third quarter, the Braves only led, 33-32.

In a defense-led fourth quarter, the Braves stifled the Grenadier offense for nearly two minutes before regaining possession off an offensive foul on Marlon Allen. Junior Matthew Sokol drove to the hoop and made a contested layup to put the Braves up 35-32 with four minutes remaining in the game. After the referees called traveling violations on both teams, Boone took possession of the ball with 2:58 remaining. Colonial capitalized on an and-one opportunity as the clock winded down for a three-point possession, and shortened the deficit to 37-35.

On a key offensive opportunity with less than a minute remaining that could’ve potentially put the Grenadiers away, Robert Soto went zero for two at the free throw line. Colonial had the ball, needing to score two points in order to tie the game with 22 seconds left in the game. Boone defense came through late in the game as Marlon Allen wrestled for possession of the ball with .4 seconds remaining to seal victory for the team.

In a game much closer than the defending district champion Boone Braves anticipated, they came out ahead 37-35 to advance in the district final game today. Boone will face the University Cougars at Lake Nona. Tip-off is at 7 p.m.