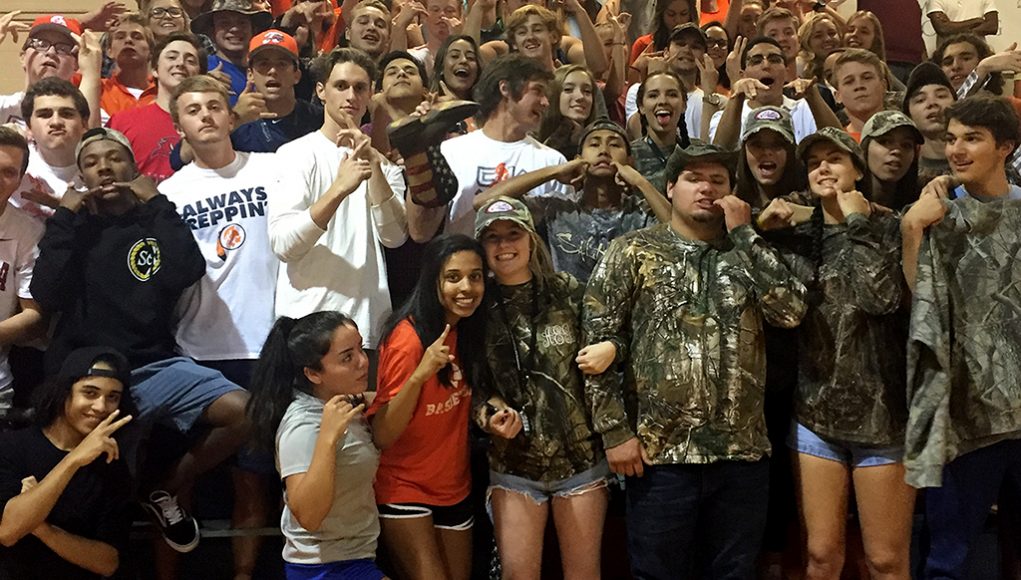 In their first matchup in over three years, the boys basketball team (21-7) faced the Wekiva Mustangs (23-5) in the regional semifinals at Wayne Rickman Gymnasium.

The game started with junior Sean Halloran hitting a deep three pointer to pump up the home crowd and give the team an early lead. Senior Angel Gonzalez got in on the scoring as well, making two free throws after a shooting foul. At the end of a back-and-forth, but low scoring, first quarter, the Braves led 10-7.

Senior Justin Butler and Gonzalez picked up the intensity in the second quarter, with Butler hitting a contested layup and Gonzalez hitting a three pointer to put the Braves up, 15-9. Sophomore Marlon Allen contributed on defense, swatting the ball out of the air over a Wekiva shooter who stood at 6’9″. Senior Jason Preston made an impressive play as well, passing the ball to senior Zachary Morales as he fell to the court. Morales hit the three pointer off the assist to wrap up the first half. At halftime the Braves led the Mustangs, 21-15.

Halloran picked up right where he left off to start the third quarter, as he found the bottom of the net for three points to put the team up by seven. Two layups from Allen and Morales gave the Braves their biggest lead of the game at 31-22. At the close of the third quarter, the Mustangs cut the Braves’ lead to 31-25.

The Mustangs closed the gap in the fourth quarter, but Gonzalez and Butler tried to fend off the comeback with shots made inside the interior. After Butler’s layup, the Braves held a 35-33 lead with a mere three minutes remaining. However, after a two pointer from the Mustangs, the game was knotted up at 35. The score remained there through the end of regulation after Wekiva failed on their buzzer beater attempt. Four quarters of play couldn’t decide a winner so both teams headed to overtime.

The Mustangs took the early lead in OT with a mid-range jumper to take a two-point lead. Gonzalez and senior Patrik Lubin had chances to tie the game with shots inside the paint, but both missed. With 24 seconds remaining, the team was forced to foul intentionally, but Wekiva missed their free throw attempts keeping a game-tying shot possible. Boone missed their attempt to tie the game up with seconds remaining, but regained possession with 1.7 seconds left after a miraculous turnover from their opponent. However, after two timeouts, coach David Martinson couldn’t out-strategize the Mustangs as the miracle shot didn’t fall for the Braves.

In a game that oddly paralleled their regional final against Hagerty, a game in which they lost by 6 in overtime, the Braves fell to the Mustangs in a low-scoring affair with a final score of 35-37.

Halloran led the team with two points, with other key performances coming from Gonzalez and Butler.

The boys basketball team ends with a 22-6 record, after a season filled with winning streaks and an impressive playoff run.