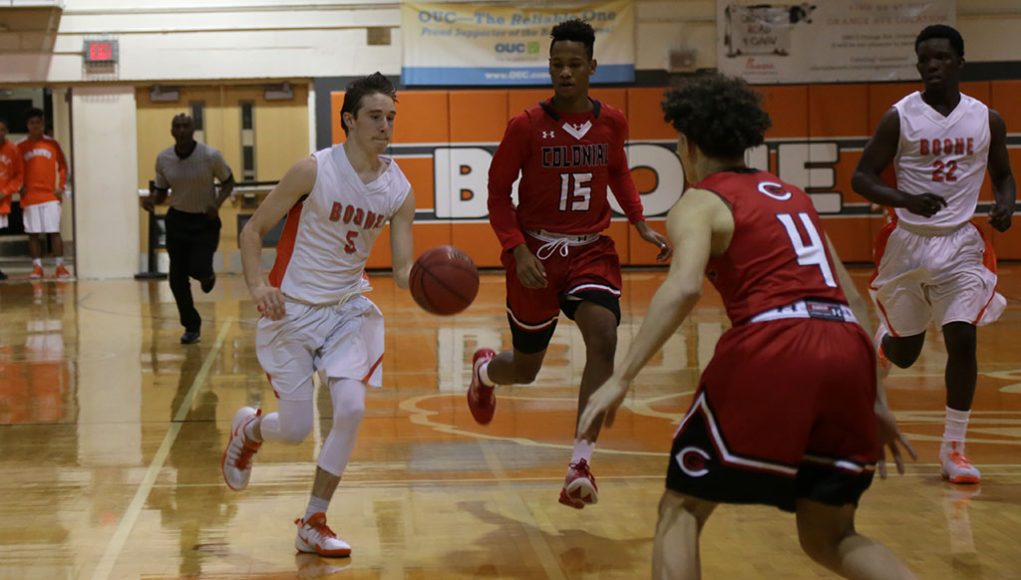 Halloran started the night getting fouled and making one of his free throws. He followed with two more baskets shortly after putting the Braves in the lead, 5-2.

Halloran assisted senior Angel Gonzalez who shot a basket. The Grenadiers made another foul again, and senior Jason Preston made one of his free throws. Junior Carver Reeves shot the ball at the last second of the first quarter, ending it 12-5.

Senior Patrik Lubin started the second quarter with two baskets, one assisted by Halloran. A Grenadier fouled Halloran, again, and he made both free throws, 22-12. The boys ended the first half 22-12.

Lubin made another basket, off an assist from Halloran, in the start of the second half. Morales shot a 3-pointer, and following with two more two pointers, 41-27. Halloran stole the ball from a Colonial player and passed it to senior Justin Butler, who made a pass to Gonzalez for another basket.

A Grenadier fouled Butler, who then made both free throws to end the third quarter, 48-29. Halloran made a basket to start the fourth quarter, along with a 3-pointer from Morales off an assist from Butler. Senior Tylandis Bennet shot and missed, but luckily junior De Kavias Bracey got the rebound and made a layup, 57-36. Colonial made a basket to end the game, 57-38.

Come out and support the Braves as they take on Timber Creek at Timber Creek High School on Dec. 15 at 7:30 p.m.