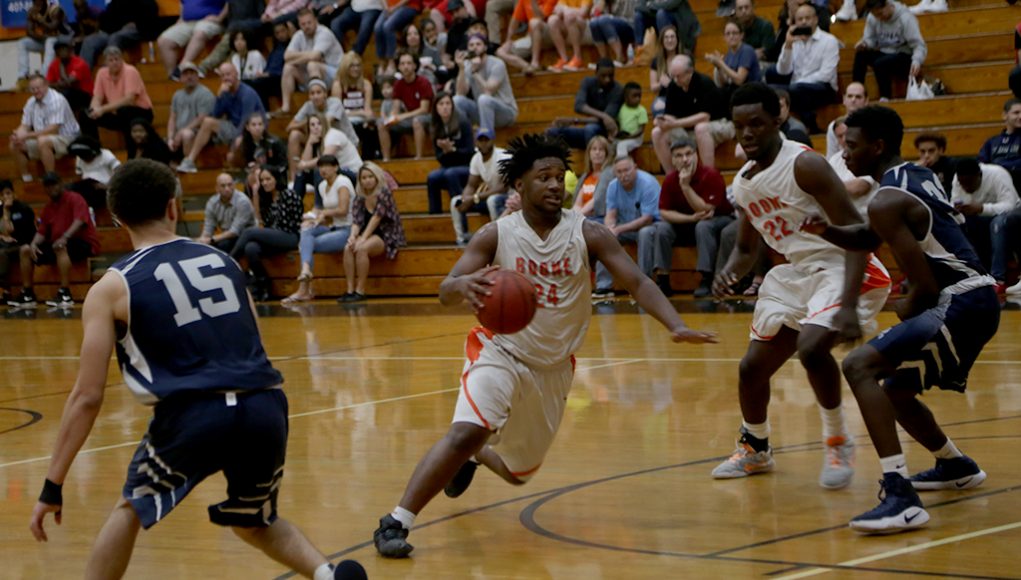 After an exciting and, in some ways, unprecedented regular season for the boys basketball team (18-7), they entered playoff action with a district semifinal against the Lake Nona Lions (11-15).

The game started with some quick offensive action from junior Sean Halloran, as he hit multiple three pointers in the first quarter to give the Braves an early lead. After some great defense from both sides late in the first, the Braves led 13-5 through one quarter.

In the second quarter, the team got better performances from all around the court, with each player of the starting 5 making at least one shot. Some key highlights of the quarter came from senior Patrik Lubin who broke up court for the fast break layup off the assist from Halloran. Senior Angel Gonzalez came alive as well, getting inside the paint and making multiple layups, with senior Zachary Morales setting up one of them. After some back and forth from both teams at the end of the second quarter, the Braves led 24-16 at half.

Coach David Martinson must have had some inspiring words for his team at halftime, as the Braves jumped right into the second half, starting on an 8-0 run with Halloran nailing another open three over some soft defense. Halfway through the third quarter, the Braves led 32-16. Morales and Halloran made consecutive layups to cushion their huge lead and Gonzalez made a key defensive play, stepping in front of a Lake Nona pass and making the no-look assist to senior Tylandis Bennett for a fast break layup. At the end of the third quarter, the Braves led the Lions, 49-18.

The entirety of the fourth quarter was garbage time for the Braves as they kept adding to a double digit lead. Junior Joseph Ketchum came in to end the game and he lobbed up a floating pass to junior Da Kevias Bracy who tapped the ball into the net to put an exclamation point on a dominant win.

After a completely dominant second half for the Braves, one in which they outscored the Lions 36-7, the team took home a 60-23 playoff win over Lake Nona. They gain a berth to the regional playoffs with the win and move to the next level of district playoffs.

Key performances came from Halloran, who led the team with 21 points and five three pointers, and senior Justin Butler, who commanded the interior and scored 12 points.

Come out and support the Braves basketball team as they move on to the district finals, where they’ll face the University Cougars on Friday, Feb. 10, at Winter Park.