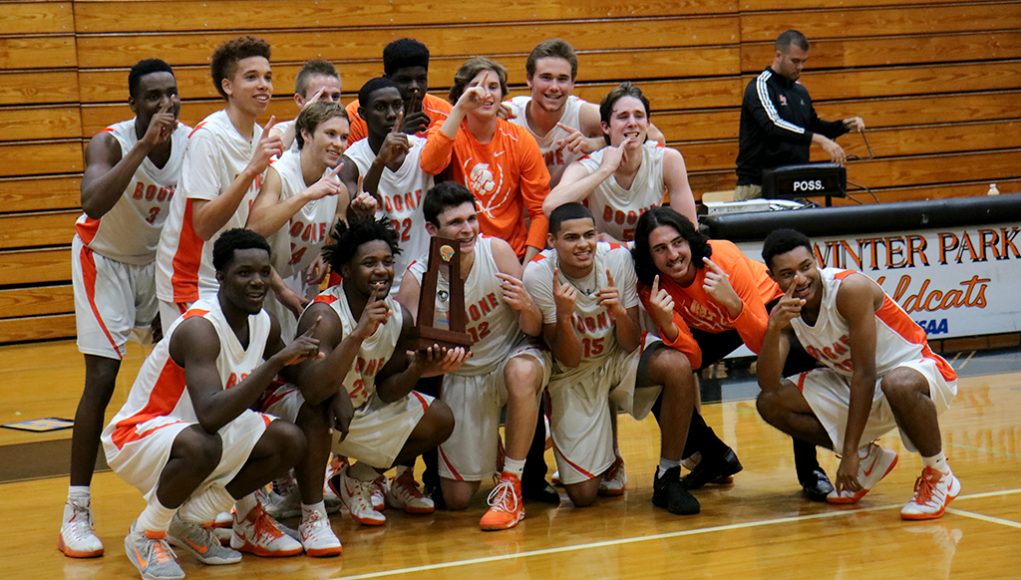 In a postseason rematch of a game that came down to the buzzer during regular season play, the district final between the Boone Braves (19-7) and the University Cougars (17-8) was just as close as expected.

The game started off with senior Zachary Morales making a deep three pointer in a first quarter filled with back and forth offense from both sides. Consecutive shots from seniors D’Angelo Muff and Angel Gonzalez gave the Braves a lead midway through the 1st and they stayed on top, leading 15-10 at the end of the quarter.

The Braves got hot shooting the ball in the second quarter, with junior Sean Halloran coming alive inside the paint, making key layups thanks to Gonzalez and senior Patrik Lubin. Two three pointers from Jordan Morales and a deep one from Gonzalez gave the Braves a double-digit lead, entering halftime. They led the Cougars 32-19 through two quarters.

Sophomore Marlon Allen made a large presence in the beginning of the second half, scoring two points on offense, and quickly getting down the court to block a shot. The connection between Morales and senior Justin Butler proved to be key, as Butler scored two layups off two inbound passes from Morales, one of which was a full court pass. At the end of the third quarter, the Braves led, 45-35.

Foul shots proved to be key for both teams in the fourth quarter, as a large reason for the Braves’ victory was their shooting 13 of 18 foul shots in the final period. The Cougars, desperate for a chance to get back in the game, had to intentionally foul in the final seconds of the game. Key shooters like Halloran and Gonzalez came in clutch from the charity stripe and the Boone defense held strong leading to a victory in a game that wasn’t decided until the last minute. Boone took the Class 9A District 4 title beating the University Cougars, 64-55.

The Braves had a balanced offensive attack, with Lubin leading the team with 13 points, and Morales pitching in 11 and Halloran talling 10.

Both teams will advance to the regional playoffs. The Braves gain home-court advantage with the win. They will face  West Orange, a team that they beat 62-49 in the regular season, on Thursday, Feb. 16.