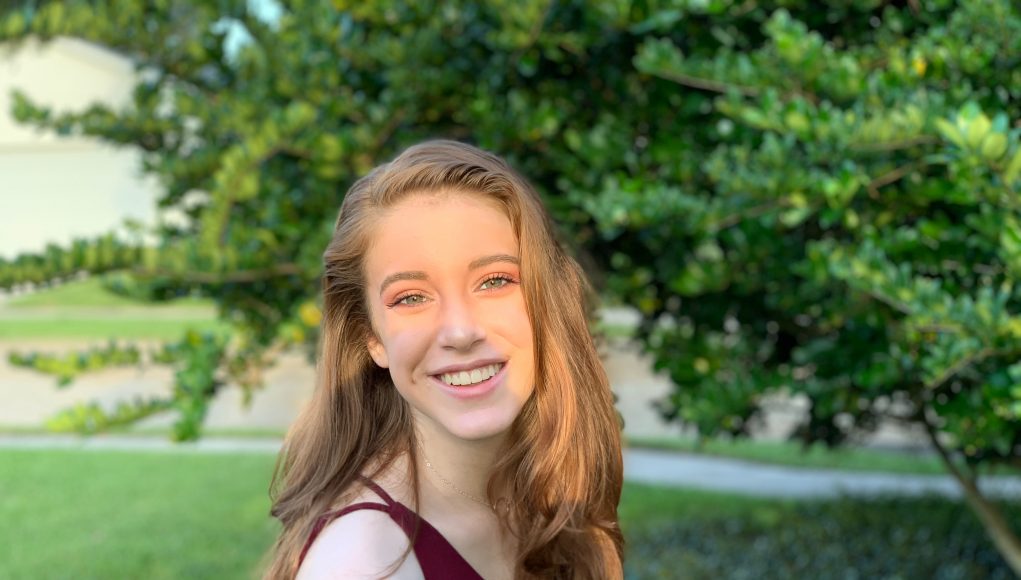 Katherine Wurst is one of 27 valedictorians.

What college do you plan on attending? “American University”

What was your deciding factor in choosing American University? “American offered me a pretty amazing scholarship, which was a huge factor because I’m not exactly a huge fan of being in debt all my life. However, the biggest thing was just all of the resources both the school and D.C. have to offer. There’s a lot of career support and they have a very high study abroad rate. The city itself is amazing and has a lot of opportunities for whatever you want to study so I’m excited to explore the history there.”

What is your intended major? “I aim to major in Business Administration with a specialization in Marketing, and a possible double major or minor in Environmental Science.”

What does studying marketing and environmental science mean to you? “While marketing has often been presented in the context of products and business, I am more interested in how larger concepts are communicated and “marketed” leading to their acceptance or rejection. One example of this  is the issue of climate change, and its evolution in its communication has yet to result in universal buy-in for collective action.  I, like many others in my generation, are suffering the effects of years of human abuse towards the Earth, and frankly fear for our future. I want to combine the spheres of business and science to initiate action on both an individual and national scale against the impending dangers that face our planet.”

What is your favorite Boone memory? “Being a part of the play ‘Too Much Light Makes the Baby Go Blind‘ freshman year. It was fast-paced and unpredictable, but I had the most amazing time working on it. I [also] ate pasta off the stage.”

What is the strangest advice your parents or a teacher gave you that proved to be correct? “Never watch the movie The Human Centipede. I did anyway. I have many, many regrets.”

Where do you see yourself in 10 years? “I never actually know how to answer this question. Life changes constantly, and I don’t even know where I’ll end up. Wherever it is though, I’d like to be alive, happy and healthy. And with a bag of Twizzlers.”

What makes you unique? “[I’m graduating at 16, I skipped the fourth grade and my birthday is late] I mean that is pretty cool. But considering I am successful in school, I don’t really let my age define me, because I think I’m on the same playing field as everyone else. I think what makes me unique is that I try to bring humor into everything; I’ve suffered from depression and I’ve found laughter has always helped me. So, I always try and make others laugh and be happy because I know what it’s like and I want to help people get out of it.”

What was something that kept you motivated throughout high school? “Mrs. Hilley. She was always there whenever I had trouble of any kind. She cares about her students immensely, and puts our well-being first. Whether there for a heart-to-heart chat or a nice cup of tea, she could always put a smile on my face. Oh, also Coca-Cola. I wouldn’t be where I am today without caffeine. I’d probably be in bed.”

Who is your hero and why? “There’s so many people who’ve inspired me, but a huge hero of mine is Robin Williams. He was a genius comedian and just a wonderful person in general. He never let judgement from other people drop him. The world was his playground, and his biggest priority was always fun. He was just an amazingly talented man and I aspire to be even half the person he was when I grow up.”

Explain the biggest challenge you went through and overcame during high school? “The year before we started high school, my dad received a double-lung transplant. He had been on oxygen for a while after having a degenerative autoimmune disease, and it had all finally culminated to the operation. I had to face the possibility of losing my dad at 12 years old. There’s been a lot of adjustments in my family’s lives, and throughout high school it has been a consistent struggle to face mortality other and hardships. I’ve grown a lot as a person because of his ordeal, and despite multiple setbacks and complications, I am fortunate that he is still here and able to see me graduate, albeit virtually.”

What advice do you have for incoming students? “It’s going to be okay. Things will go right, and things will go wrong. In the end, though, it’s just four years, which go way faster than you’d ever expect. Just remember you are amazing and unique. Do the things you love. Follow your own path and be proud of being you.”