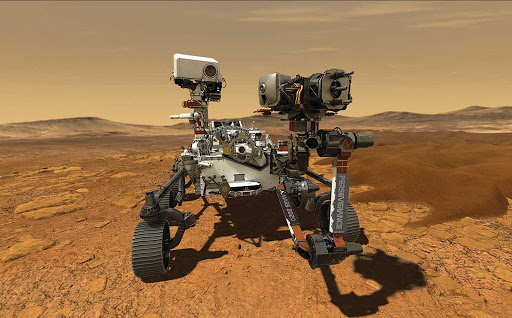 Perseverance, the most sophisticated rover yet sent to the “red planet,” holds a main purpose of analyzing the microbial contents on Mars.

The rover takes a piece of the citizens of Earth, with three microchips housing over 10.9 million names, and a morse code saying “exploring as one.” There is also a laser printed Earth and Mars image, representing the unification of Earth and Mars through exploration by the Perseverance rover.

Additionally, the rover which extends 10 feet long, contains equipped parts used to provide the rover the best view of Earth. It includes 19 cameras on the rover, and four on the spacecraft itself that make the rover land. The rover also includes the memorable attribute as the most secure space rover to land on the hazardous surfaces of Mars.

The rover is also equipped with a helicopter named Ingenuity, “a technology demonstration to test the first powered flight on Mars” a NASA representative said. With the atmosphere of Mars less than 1% of the Earth’s, it is a significant accomplishment for ingenuity to launch into the Mars atmosphere. While the most significant milestone to overcome is the initial landing on Mars, many are excited to see the explorations created into the martian atmosphere.

With COVID-19 delaying technological advancements for companies around the world, the Perseverance rover manages to explore Mars on the expected date. “By putting the health and safety of the NASA team first, we’ve been able to safely navigate the challenges of COVID-19 and keep our missions moving forward as much as possible,” NASA Administrator Jim Bridenstine said in an interview discussing COVID-19 policy.

While it is difficult to predict what the findings will show, Perseverance represents a new phase of space exploration.