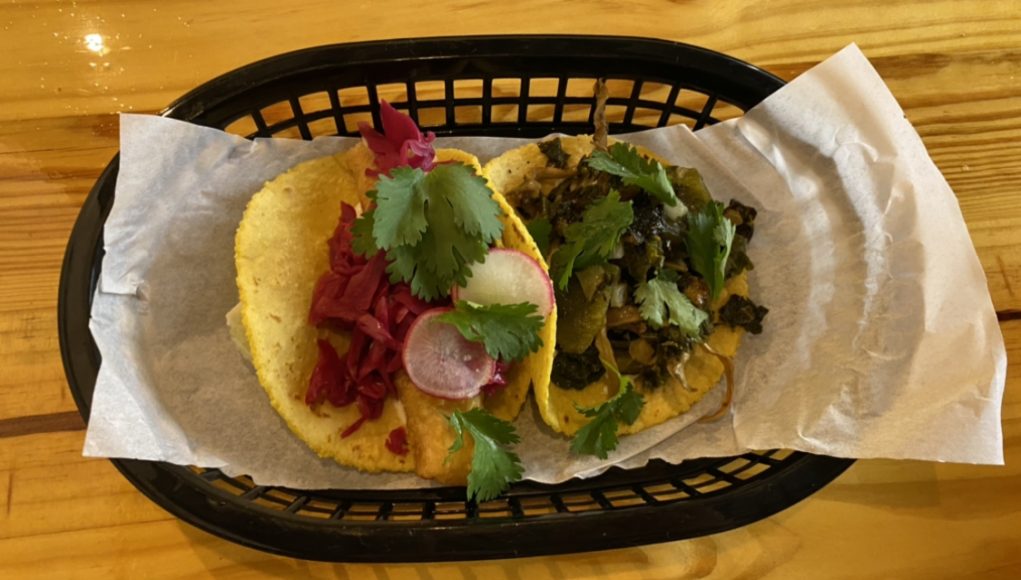 Black Rooster Taqueria opened a second location on Curry Ford, next door to Floyd’s Barbershop. The family-owned restaurant initially opened in February 2016 on North Mills Avenue. Now, they’ve brought their unique spin on Mexican cuisine to Curry Ford. As of right now, the Curry Ford Menu matches the Mills menu, with plans to add brunch to the new location soon.

The restaurant fosters a warm atmosphere in lighting and layout, boasting industrial touches like corrugated metal and exposed hanging light bulbs. Though this modern industrial style has become ubiquitous in newer restaurants, the Black Rooster keeps it fresh with the addition of multi-colored bar stools, framed Mexican art and a large mural of a rooster.

Upon walking through the doors, customers first order at a cash register, then seat themselves and wait for their food to be brought to them. Instead of using numbers, the cashier hands patrons a cartoon character bobble head as a table identifier, which provides a fun deviation from the norm. While seating themselves, patrons can choose between small high top tables and private booths.

The restaurant does not offer fountain drinks, but customers can choose from a selection of Mexican soda, sparkling water and alcoholic beverages. In particular, Jarritos pineapple soda provides a sweet and neutral pairing for the flavorful food to come.

At $9.25, the shrimp ceviche is the priciest appetizer on the menu, but the taste is well worth it. The ceviche is light and fresh, and comes in a pretty patterned bowl. Fresh tasting cilantro and tomato complimented the shrimp, and orange slices added a sweet flavor. The only downside was that the tortilla chips came sitting in the broth and would become soggy if not eaten quickly. The portion size was also a little small for its price, providing a good starter for no more than two people.

For entrees, patrons can choose from a variety of salads, bowls (slow cooked meat in broth) and tacos. The tacos came on small round tortillas, resembling street tacos. Most of the tacos on the menu come with meat like pork, chicken, or beef, but customers also have non-meat options to choose from.

Namely, the Smoked Greens taco was a meat-free standout. The sweetness of the cooked plantains combined perfectly with the kale, ricotta, onion and shiitake mushroom. The taco is savory, and provides a pleasant experience even if one is skeptical of kale or mushrooms.

The Crispy Fish was less impressive than the Smoked Greens taco, but was still worth trying. The texture of the fish lives up to its name, and is complemented well by cabbage and avocado. Upon first trying it, the taco was a bit dry and less flavorful than it could have been, but the addition of lime juice solved both problems.

All of the tacos range in price from $3.25 to $4.75, which is costly for their size, but they provide a tasty and fulfilling meal if one is willing to splurge a little.

As a side, one can choose from Colombian Pinto Beans, Vegetarian Black Beans, Sweet Plantains and Cilantro Poblano Rice.

For dessert, the restaurant offers Tres Leches Cake and Chocolate Chipotle Flan. The flan had a very nice texture but had a spiciness that masked the chocolate taste and made it less enjoyable as a dessert.

Despite a few drawbacks, the restaurant’s new location in the Curry Ford West district provides an inviting atmosphere and delicious food. Anyone in search of flavorful Mexican food that is family owned and more than a few steps above Chipotle should look no further than the Black Rooster Taqueria.