Home Entertainment “Everything Everywhere All at Once” is bizarrely brilliant 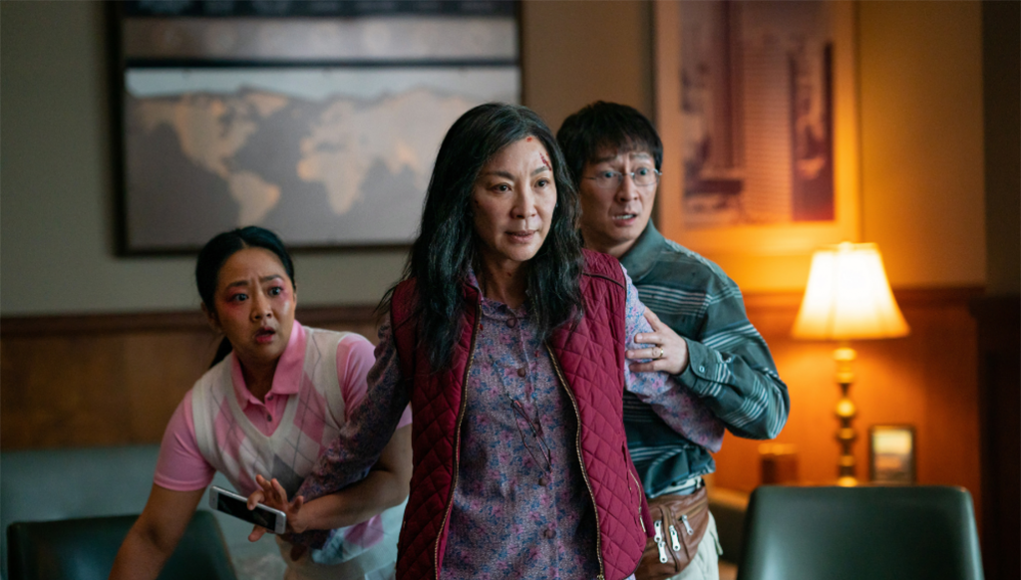 Everything Everywhere All at Once is rated R.

The following contains spoilers for Everything Everywhere All at Once

Written and directed by the Daniels (Daniel Kwan and Daniel Scheinert), Everything Everywhere All at Once wide released on April 8, following its limited release on March 25. The film brilliantly combines humor and heart to create a story about love and family.

The film follows Evelyn, a Chinese immigrant who feels like a failure. Evelyn has dropped many of her hobbies and feels stuck working at the laundromat she and her husband Waymond own. She also struggles to maintain a positive relationship with her daughter, Joy.

Evelyn and Waymond visit the IRS to complete their taxes when an alternate version of Waymond takes over his body. He tells Evelyn that an alternate universe forms every time she makes a decision.

In one universe, Evelyn was a scientist who studied the multiverse and discovered a way to jump between alternate versions of herself. She felt her daughter was extremely talented and had her jump between so many universes that it caused her mind to fracture.

That version of Joy began to experience every version of herself at the same time. Joy feels overwhelmed by everything and becomes Jobu Tupaki, destroying anything in her way. She also hunts down various versions of Evelyn.

The alternate version of Waymond tells her that due to her failed hobbies, she was the version of Evelyn that could take down Jobu Tupaki. Because she has experienced the most failure, she has the most potential.

Evelyn has no interest in saving the multiverse, only in saving the version of her daughter that she knows. She decides to fracture her mind by jumping through universes in the same way Jobu Tupaki did.

Jumping between versions of herself allows Evelyn to acquire the skills she has learned in other lives. The film shows this through montages. Scenes will cut between a version of herself learning Kung Fu and her current self fighting off Jobu Tupaki’s minions.

This makes for interesting action scenes. Instead of watching the same old combat, audiences can see characterization and action at the same time. Seeing how Evelyn behaves in other universes while she fights shows the audience why they should care about her.

Evelyn feels envious of the other versions of herself she sees. She sees herself as a chef, a martial artist, a singer and more. She feels tempted to just stay in those universes instead of facing her current reality.

Once Evelyn comes face to face with Jobu Tupaki, she finds the reason for all of the chaos. Tired of experiencing everything at the same time, Jobu Tupaki created a way out. She wants Evelyn to follow her into a black hole that possibly will stop everything.

Evelyn feels tempted to join her. In other universes she breaks windows, divorces her husband, screams at her concert and gets her co-worker fired. She has realized how small she is in the grand scheme of things and thinks that nothing matters.

In multiple universes, Waymond tries to calm Evelyn down. In one, he explains that he chooses to fight the world with love. Evelyn realizes that in a world where nothing matters, loving the people around her does.

Evelyn begins to fight Jobu Tupaki with love. She finally accepts her daughter as she is and wants to enjoy life’s small moments. She realizes that she does not have to be successful in life in order to love it.

Evelyn convinces Joy to stay in reality and appreciate the little moments of happiness. Even though it is not extravagant, they decide to work on taxes and keep the laundromat business up and running.

The storytelling is not the only great part of the film. Everything Everywhere All at Once uses cinematography to its advantage. Aspect ratios make the switch between timelines more cohesive and colors show how the characters feel.

Color is also used to express emotion. For example, in a scene where Evelyn realizes that love and family still matter to her, different colors flash across her and Waymond’s faces.

Additionally, the film even utilizes its sound to express the chaos. While it is usually noisy, moments of silence are spread throughout. One universe contains no life on Earth and Evelyn takes the form of a rock. Text is placed on the screen to show what she is saying. The silence helps emphasize the chaos that has been happening.

In general, using the multiverse to tell a story about failure and unconditional love is a bizarre idea but the Daniels use it perfectly. One universe finds humans with hands made of hot dogs, yet the universe still contains a lesson for Evelyn to learn. Even though the idea is crazy, the combination of different bizarre universes helps send home the theme.

Overall, Everything Everywhere All at Once is a film that everyone can love. From beautiful shots to the emotional themes, the movie contains all the right elements. Everything comes together to create an explosion that will leave a lasting impact on all audiences.