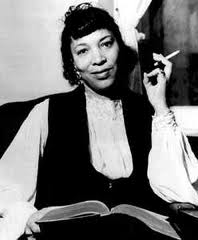 In addition to being a fine writer of fiction, Zora Neale Hurston was a folklorist and cultural anthropologist. About her writing, Hurston once said, “I tried…not to pander to the folks who expect a clown and a villain in every Negro. Neither did I want to pander to those “race” people among us who see nothing but perfection in all of us.” In a letter to her friend and fellow writer Fannie Hurst, Hurston wrote, “I know I cannot straighten out with a few pen-strokes what God and men took centuries to mess up. So I tried to deal with life as we actually live it–not as the sociologists imagine it.”

Hurston’s efforts were not universally appreciated by other members of the Harlem Renaissance, most notably Richard Wright. In a 1937 review for New Masses, Wright chided Hurston for not focusing on “motive fiction” or “social document fiction” and had particularly stinging things to say about her use of dialect in Their Eyes Were Watching God:

Her dialogue manages to catch the psychological movements of the Negro folk-mind in their pure simplicity, but that’s as far as it goes.

Miss Hurston voluntarily continues in her novel the tradition which was forced upon the Negro in the theatre, that is, the minstrel technique that makes the “white folks” laugh. Her characters eat and laugh and cry and work and kill; they swing like a pendulum eternally in that safe and narrow orbit in which America likes to see the Negro live: between laughter and tears.

Like Mark Twain before her, Hurston was exacting in her reproduction of speech patterns, both writers valuing authenticity over the preferences of the time. The following is a passage from “Characteristics of Negro Expression,” written by Hurston and published in Negro, 1934.

If we are to believe the majority of writers of Negro dialect and the burnt-cork artists, Negro speech is a weird thing, full of “ams” and “Ises.” Fortunately, we don’t have to believe them. We may go directly to the Negro and let him speak for himself.

I know that I run the risk of being damned as an infidel for declaring that nowhere can be found the Negro who asks “am it?” nor yet his brother who announces “Ise uh gwinter.” He exists only for a certain type of writers and performers.

Very few Negroes, educated or not, use a clear clipped “I.” It verges more or less upon “Ah.” I think the lip form is responsible for this to a great extent. By experiment the reader will find that a sharp “i” is very much easier with a thin taut lip than with a full soft lip. Like tightening violin strings.

If one listens closely one will not too that a word is slurred in one position in the sentence but clearly pronounced in another. This is particularly true of the pronouns. A pronoun as a subject is likely to be clearly enunciated, but slurred as an object. For example: “You better not let me ketch yuh.”

In story telling “so” is universally the connective. It is used even as an introductory word, at the very beginning of the story. In religious expression “and” is used. The trend in stories is to state conclusions; in religion, to enumerate.

I am mentioning only the most general rules in dialect because there are so many quirks that belong only to certain localities that nothing less than a volume would be adequate.