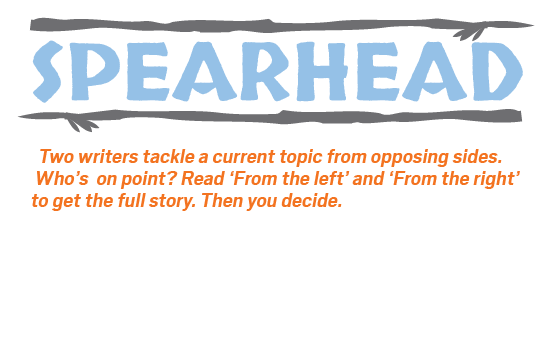 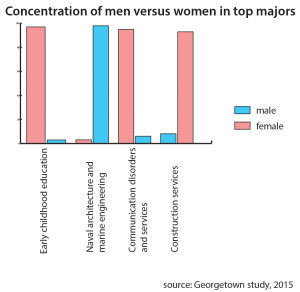 Freedom, justice and equality epitomize power. Globally revered as an international superpower, the United States embodies these three concepts. However, an ongoing debate ensues among U.S residents questioning if women are treated equally to men. According to the July 2014 Census, 162 million females live in the U.S, compared to 157 million males. As the majority, women seek higher education, professions and paychecks. Society plays a role at defining women’s measure of equality to men.

As a rule, women tend to gravitate to fields such as education, psychology, biology and art history, while men outnumber women in mathematics, science and engineering. A Georgetown University study shows that 100 percent of the 10 majors with the highest concentration of women, earn a $60,000 salary or less. Eighty percent of male dominated majors earn more than $60,000 a year. According to “The Social and Political Views of American Professors”, by Harvard University and George Mason University professors, Neil Goss and Solon Simmons, 74 percent of professors believed differences of interest in men and women causes the relative scarcity of female professors in math, science and engineering.

Women have the same educational opportunities as men. According to the Census Bureau, women in the United States lead men in educational fulfillment for the first time, since it began tracking in 1940.  Women earn more PhDs in humanities, social sciences, education and life sciences. Men prevail by large numbers in engineering, physics and computer science. In other words, men and women have differentiating interests.

As for women in business, a Rochester Institute of Technology study reports, female business owners make significantly less than their male counterparts, mostly because “money is the primary motivator for 76 percent of men versus only 29 percent of women. Women place a higher premium on shorter work weeks, proximity to home, fulfillment, autonomy and safety.” Male-run businesses are 3.5 times more likely to surpass $1 million in sales than their female-run counterparts and only 2 percent of women-owned companies break the million-dollar mark, Ernst & Young, a professional services headquarters reports. Female-owned businesses, typically smaller, concentrate in service industries that tend to make less in revenue.

However, the top female CEOs make more than male CEOs. The eight female chief executive officers at the 100 largest companies in the U.S. earned $22.7 million in 2015, compared to $14.9 million for male CEOs, according to data analyzed by compensation analytics firm Equilar. For example, Yahoo’s Marissa Mayer made $36 million in 2015.

The left alleges women in the United States earn 77 cents for every dollar men earn, as President Barack Obama remarked in his 2014 State of the Union Address. First, common sense proves otherwise. If women really earned 23 cents less than men for the same job, arguably every company in America would strictly hire women and enjoy a financial advantage. The Bureau of Labor Statistics notes that its analysis of wages by gender does “not control for many factors that can be significant in explaining earnings differences.” For example, full-time employment, defined as at least 35 hours per week, raises a concern. Sarah Ketterer of The Wall Street Journal writes: “A simple side-by-side comparison of all men and all women includes people who work 35 hours a week, and others who work 45. Men are significantly more likely than women to work longer hours, according to the BLS.”

The evidence shows unless women develop new interests, men and women’s earnings will not be equivalent. Women’s educational opportunities do not differ from men’s. Simply put, in the pursuit of happiness, men and women take slightly different paths.