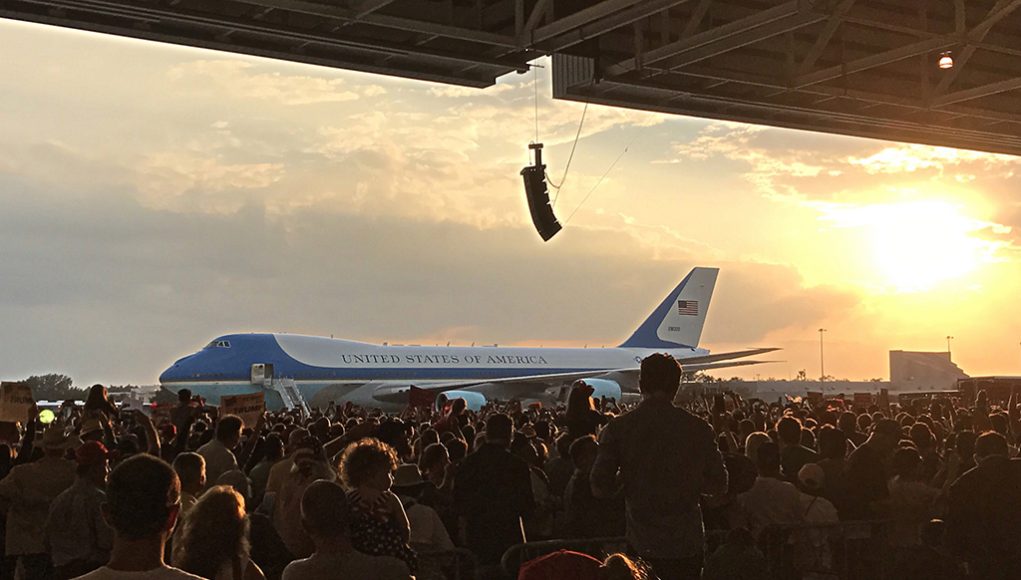 After one month as president, Donald Trump held a campaign-funded rally Saturday, Feb. 18, at the Orlando-Melbourne International Airport before going to Mar-a-Lago for the weekend.

During his first rally since the election, President Trump clarified the event’s purpose, to update supporters on the progress made thus far and speak directly to the American people “without the filter of the fake news.”

Trump began his speech railing against “the dishonest media,” criticizing them for publishing “one false story after another.” He went on to say the press “don’t want to report the truth . . . they don’t get it, but they’re starting to get it.”

“I hope this war against the media stops. I supported Trump. His comments were way out of bounds,” Federico Alves, host of Tampa-based Hispanic radio station Super Q1300 said.

In the middle of the speech, the Secret Service apprehended Trump supporter Gene Huber before the president called them off, inviting him onstage to take the mic and address the audience.  He accepted, giving a brief statement to the crowd praising the president for his accomplishments. After the man stepped down, President Trump remarked, “I wouldn’t say the Secret Service was thrilled with that, but we know our people.”

Subsequently, Trump addressed the Ninth Circuit Court of Appeals, criticizing them for their decision to block his controversial travel ban, Executive Order 13769.

The president later alluded to the refugee crisis, stating, “you look at what’s happening last night in Sweden . . . They’re having problems like they never thought possible.”**

He then claimed the previous administration let “thousands and thousands of people” into the United States, with “no way to vet those people.”***

Throughout his speech, President Trump referenced several other key issues that defined his campaign. Issues like the Mexican border wall, illegal immigration, NATO, TPP, and the Affordable Care Act. Additionally, Trump used iconic taglines such as “drain the swamp” and “make America great again” in his speech met with overwhelming cheers.

Trump closed his speech by invoking a message of unity and bi-partisanship. Finally, he declared Americans share “one home, one destiny and one glorious American flag.”

“Trump’s hatred and denial of news coverage [will be] his downfall. He needs the media to keep the electorate informed and supportive. You can’t support a president who refuses to communicate on a [reputable] platform,” senior Amythist Michalski said.

**No specific event occurred in Sweden on Friday, Feb. 17. President Trump later clarified via Twitter that he stated such in reference to a story aired on Fox News.