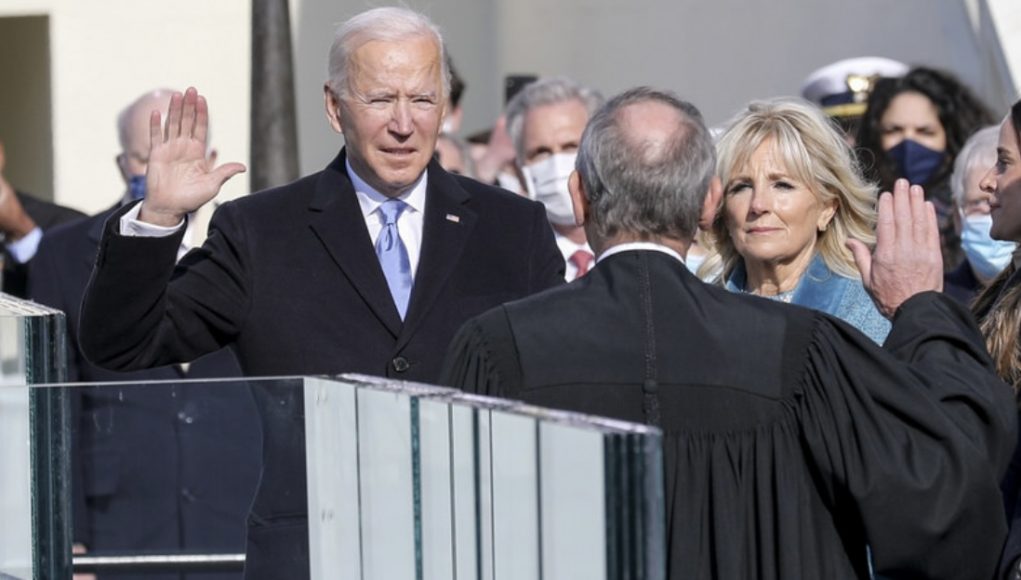 Amid threats of violence and pandemic restrictions, Joseph Robinette Biden Jr. was sworn in as the 46th President of the United States on Wednesday.

“[While watching the inauguration] I was very happy and excited. It felt like a breath of fresh air,” senior Alejandra Rivera-Campo said.

Occurring just weeks after a pro-Trump attack on the Capitol resulted in five deaths and sent lawmakers into hiding, security measures for the ceremonies were more intensive than usual. In the days preceding the ceremonies, the FBI closely monitored online chat rooms, prominent airlines banned firearms and the Secret Service closed off major D.C. roads.

In addition to the hundreds of law enforcement officers stationed around D.C., the Department of Defense deployed 25,000 National Guard members to ensure a peaceful transition of power. The FBI vetted all 25,000 members, and ended up removing twelve from the security operation for having connections to right-wing militia groups or sharing extremist ideas online.

Despite concerns about violence, however, the ceremonies went peacefully, though very differently than those in years past.

This year, Americans across the country tuned in to watch virtually because of the ongoing pandemic. The Washington Post estimated that around 2,000 people would attend in person, in contrast to more typical inaugurations, where audience members number in the hundreds of thousands.

In addition to the markedly smaller audience, masks and coronavirus precautions could be seen throughout the ceremonies, with the prominent politicians in attendance spaced apart in the stands.

Among this crowd was former vice president Mike Pence, who came to pass the torch to Vice President Kamala Harris. Harris broke barriers as the first woman and first person of Black and South Asian descent to serve as vice president.

“It was unprofessional, but it wasn’t something we didn’t expect. It fit his brand and I think it would have been worse if he was there,” Rivera-Campo said.

Hours after being sworn in as vice president, Kamala Harris delivered the oath of office to three new Democratic senators, including Alex Padilla, who was chosen to replace Harris as senator of California. With Democrats holding narrow control of the senate — a 50-50 split with Harris as a tiebreaker — for the first time in a decade, Biden is better situated to pass progressive legislation.

It’s unclear how many progressive campaign promises Biden will actually fulfill while in office, but on his first day Biden issued 17 executive actions.

Multiple of the executive orders dismantled Trump-era policies, such as a reentry to the Paris Climate accord, an undoing of immigration enforcement expansion, a halt to the construction of a Southern border wall, and a reversal of Trump’s restrictions on entry from Muslim-Majority countries.

“I think the Muslim ban was stupid anyway, because I didn’t really think it was needed,” junior Tanner Wohltman said.

Other actions included extending the ban on evictions and foreclosures to March 31, extending the pause on federal student loan payments to Sept. 30 and strengthening DACA.

“I feel like it was a very smart move on Biden’s part to prove to the country what he plans the next 4 years will be. It proved that he is ready to get to work and it shows that people will get what they voted for,” Rivera-Campo said.

As for the first 100 days of his presidency, Biden’s administration has revealed ambitious plans, including school reopenings, increased economic assistance and 100 million vaccinations.

“I just hope he does well and doesn’t mess anything up,” junior Daniel Hoffman said.