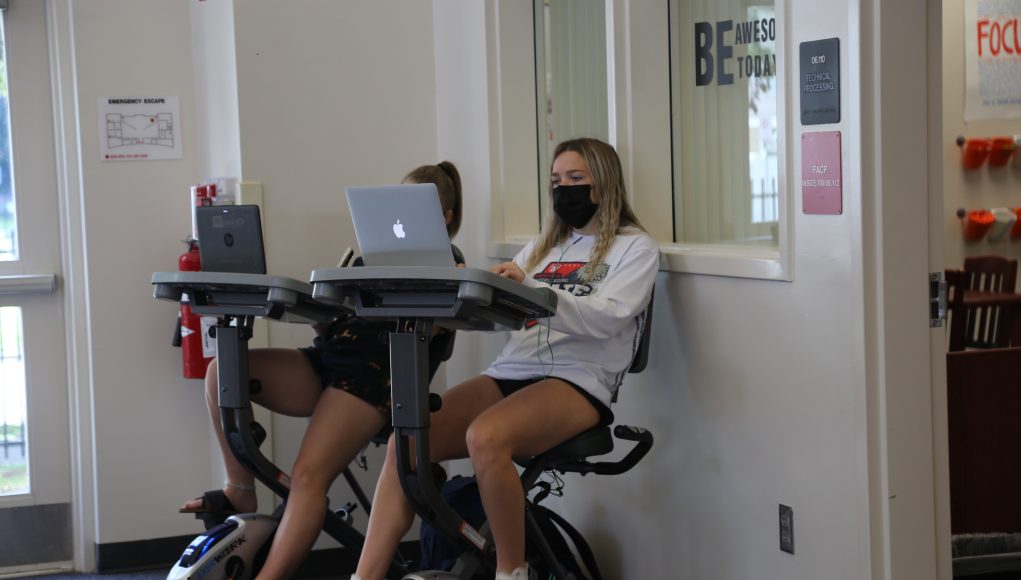 The media center added two bicycle desks to the seating arrangement to encourage mental and physical health among students. Media specialist Kimberly Turley hopes students use the opportunity to move around and switch up their environment throughout the day.

Originally, ESE teacher James Summers implemented bicycle desks for his ESE students. Inspired by Summers and other OCPS schools, Turley invested in the desks for the media center. She wants students to have an opportunity to get out of their stationary routines.

So far, students react positively to the bicycle desks. Turley remarked that multiple students ask to use them throughout the day.

“I think the bikes are amazing and really cool,” senior Luke Manfredi said.

Turley notes that the current desks only sit students at short and medium heights. The desks cannot be adjusted for students over six feet tall. Pending the success of the current seats, the media center plans to add another bike to provide comfort for a wider variety of students.

Turley believes that alternative seating benefits students. She notes that changing where students sit can make a difference for their mental health.

“I think any time you can push students out of the norm of working in the same desk and same environment everyday, it’s always going to have a positive effect,” Turley said on the benefits of alternative seating.

Alternative seating is not completely new to the media center. They previously experimented with lounge and modular seating. The media center aspires to appeal to different students and various learning styles. They accept suggestions for new types of seating from students.

“I would like to see the media center get massage chairs,” Manfredi said.

The media center welcomes all students to try out alternative seating. Students can access the bicycle desks and other forms of seating anytime the media center is open.