Although Emily Brontë helpfully includes a family tree to explain the relationships among her characters, understanding them takes a little work. Here are some helpful ways to discern who she’s talking about: 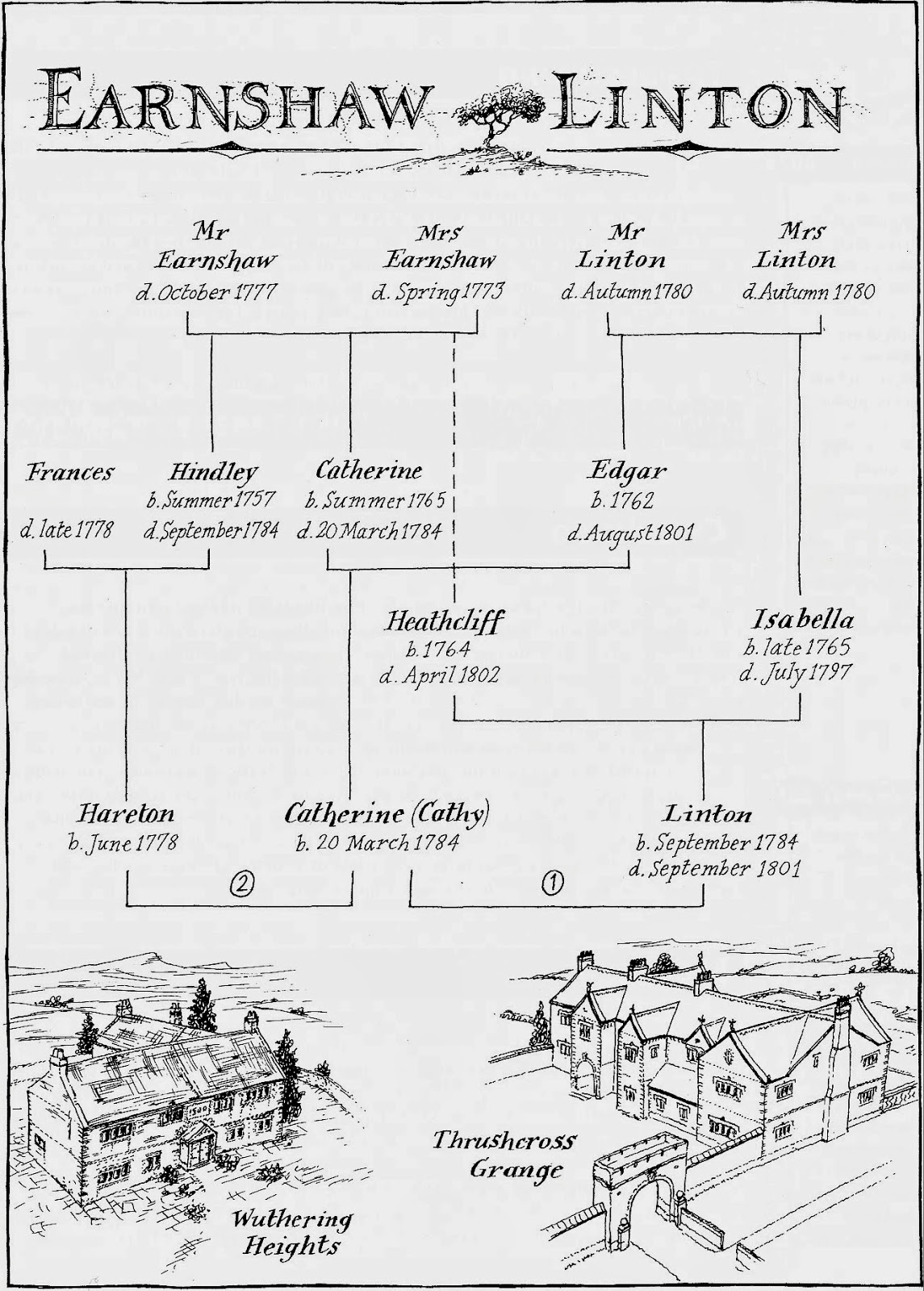 EARNSHAWS
Based on the inscription found over the door, Wuthering Heights was most likely built by a man named Hareton Earnshaw around the year 1500. That makes the Earnshaw family a very old one and probably accounts for their prominence in the society. Mr. and Mrs. Earnshaw have two children, Hindley and Catherine. Mr. Earnshaw adopts an orphan boy and brings him home to raise as a second son. This boy is given the name of a son who died in childbirth that, as Nelly Dean says, “has served him ever since, for both Christian and surname”: Heathcliff.

Hindley does not react well to this new addition to the household, but Catherine becomes very close to him. When old Mr. Earnshaw dies, Hindley inherits Wuthering Heights and becomes the guardian of his sister Catherine. Hindley treats Heathcliff like a servant rather than an adopted brother. He eventually marries a woman named Frances, who gives birth to their son, Hareton.

LINTONS
Down in the valley, Mr. and Mrs. Linton live a very comfortable and wealthy lifestyle at Thrushcross Grange. Like the Earnshaws, the Lintons have both a son, Edgar, and a daughter, Isabella. The two families are familiar with each other, but they don’t come into close contact until Catherine Earnshaw is injured during a visit and ends up recuperating for a few weeks at Thrushcross Grange. It is then that she gets to know Edgar and he eventually proposes marriage. Despite her love for Heathcliff, she accepts. Catherine dies giving birth to her daughter with Edgar, who is given her name. Catherine Linton is known in the book as Cathy.

HEATHCLIFF
Although raised with the Earnshaws, Heathcliff decides he owes them no allegiance. After Catherine marries Edgar, the penniless Healthcliff leaves the area for several years, returning as a fabulously wealthy man (no one really knows how he got his money). To spite Edgar and Catherine, Heathcliff then elopes with Edgar’s sister Isabella. They have one son together, who is named Linton after his mother’s family.