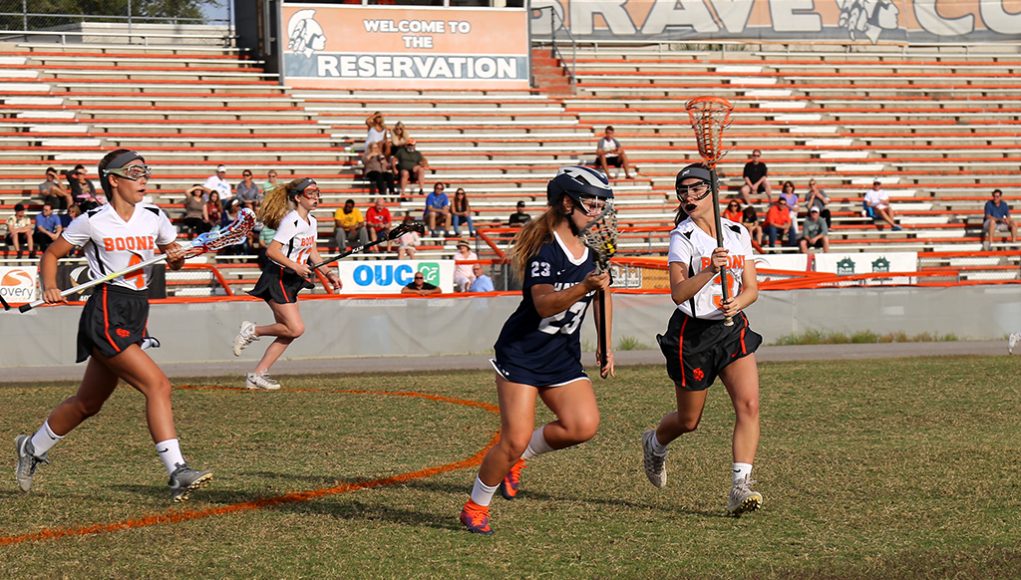 In a point for point game, the the Lady Braves lacrosse team (7-7) played the Lake Howell Silver Hawks on Monday, March 27, on the Reservation.

After junior Kara Gentry received the ball at the draw, the Silver Hawks stole the ball and attempted to score, but goalie Payton Johnson, sophomore, blocked the shot.

With an assist from freshman Lexi Pace, Darr scored on the Silver Hawks and brought the game to a tie, 3-3.The Silver Hawks broke the tie after scoring two points on the Lady Braves, 3-5. Before the end of the first half, junior Jessica Shutack scored, 4-5.

At halftime the Silver Hawks led, 4-5.

As the second half began junior Madeline Bogan made the first goal of the half, bringing the game to a tie one again, 5-5. The Silver Hawks broke the tie, 5-6. Shutack scored again creating another tie, but the Silver Hawks scored breaking the tie once again, 6-7.

With 30 seconds left on the clock, the Silver Hawks scored and ended the second half, 10-10. The game entered overtime and Chambers brought home the win for the Lady Braves with her goal on the Silver Hawks, 11-10.

The team will play the Wekiva Mustangs on the Reservation for senior night, March 30, at 7:30 p.m.