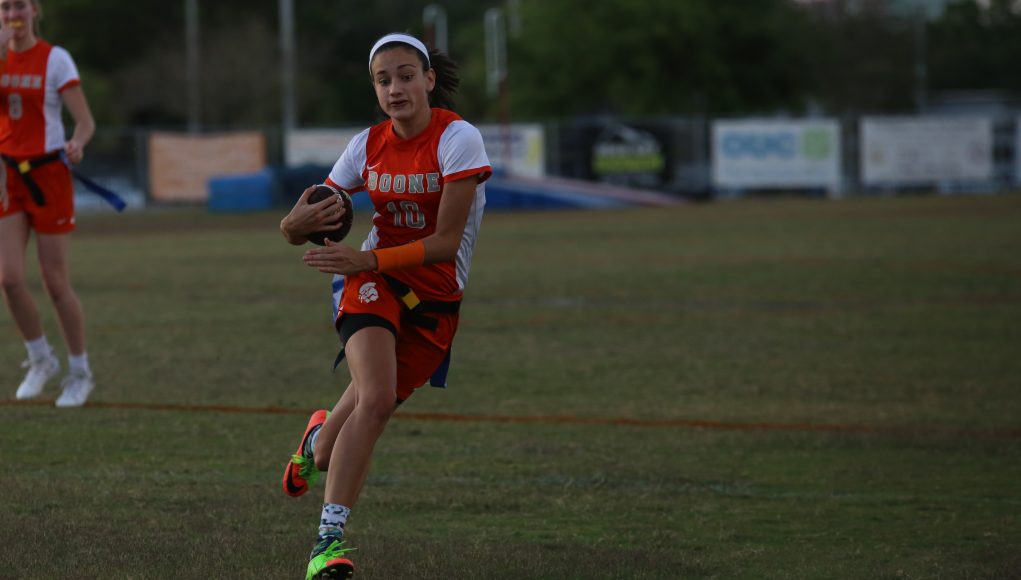 As the first quarter began, the teams took turns with ball possession. Then, junior Cassady Quintana scored a touchdown, making the score 6-0. Junior Nyra Jolly scored the extra point, bringing the score to 7-0.

Jolly started the second quarter with a touchdown, making the score 13-0. Senior Emily Matthews scored an extra point. Quintana then intercepted the ball and snagged a first down. Freshman Lainey Taczak scored a touchdown, bringing the score to 20-0.

The Titans scored their a touchdown in the second quarter, making the score 20-6. Taczak blocked the Titans from scoring the extra point.

In the third quarter, junior Hannah Richards punted the ball. To keep the Titan’s from scoring, junior Alexus Scott snagged the Titan player’s flag, which ended the punt return.

The fourth quarter began with Richards kicking a 50-yard punt. Senior Haley Hadd, later, intercepted the ball and scored a touchdown, making the score 26-6. Sophomore Madison McCoy snagged the extra point, bringing the score to 27-6. Junior Jaden Rosado knocked the ball out of a Titan player’s hand, returning the possession to the Lady Braves. Quintana ended the game with her second touchdown of the night, making the score 33-6.

The team travels to University to play the Cougars on Wednesday, March 29 at 7 p.m.