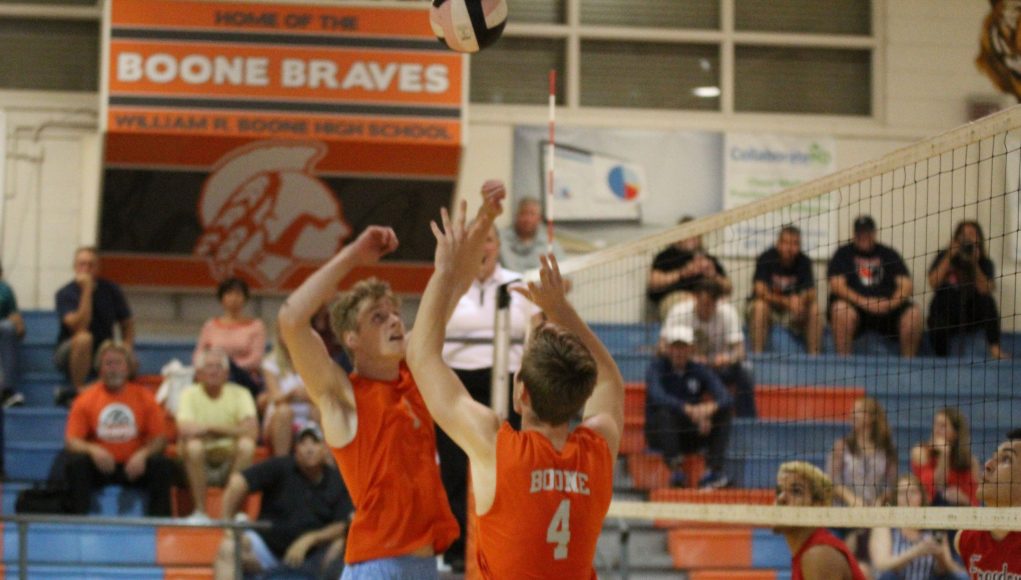 On April 19, the boys volleyball team (9-11) faced the Freedom Patriots (24-0) for a conference matchup. Freedom won in three strong sets.

The first set proved a tough match. The Patriots took a strong lead from the beginning, but the boys managed to score several points. Senior Buddy Best‘s kill helped lessen the Patriot’s lead, 6-9. Sophomore Douglas Page made a kill bringing the score closer, 9-12. Freedom continued to put up a fierce fight, increasing their lead. Senior Parker Blanchard managed a kill, 17-22. Despite a tough fight the Patriots came away victorious.

Freedom came into the second set stronger than the first set. The Patriots managed to score several times back-to-back without a score from Boone. The Braves made several attempts to lessen the gap in the score, but several errors resulted in more points for Freedom. Freedom erros allowed the Braves to earn points, but it was not enough; the game ended with Freedom victorious, 9-25.

The third set proved another intense battle. Freedom once again started the game with several unmatched points. Page’s spike was the first score of the set for Boone, 1-6. Freedom had an out of bounds serve lessening their lead, 2-8. They quickly recovered from this mishap and increased their lead to almost double. Senior Toddrick Northington blocked a spike from Freedom, 8-16. The boys continued to put up a strong opposition to Freedom, but the Patriots, once again, proved their strength by continuing to increase their lead. Blanchard’s block kept Freedom from scoring, 12-22. Freedom walked away from the final set with a victory, 13-25.

Freedom remains undefeated and first in the district.