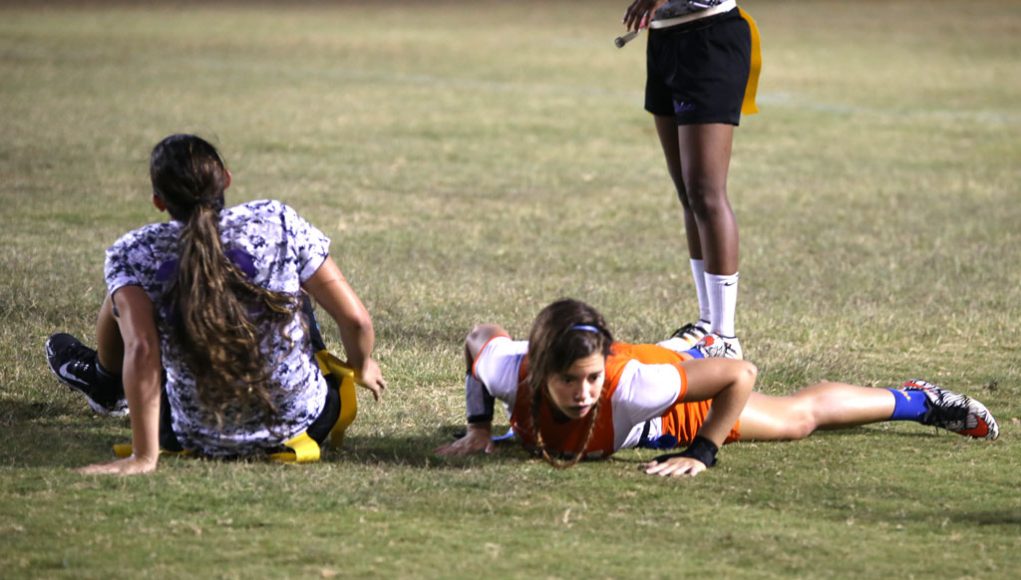 Flag football (6-2) celebrated senior night at home and faced the Timber Creek Wolves (7-2) on April 20, ultimately resulting in a loss, 0-14.

Before the start of the game, eight seniors walked with family and friends through a tunnel of teammates. They received flowers, posters and audience cheers as an announcer shared their high school highlights and plans for the future.

In the first half, junior Hannah Richards punted the ball and junior Cassady Quintana followed with an interception. The Wolves scored a touchdown, 0-7.

Timber Creek and Boone both called time-outs before the end of second quarter. At half time, coaches prepared the team for the second half of the game in a group huddle. The seniors concluded halftime with a team clap and chant, motivating and exciting the group.

Freshman Lainey Taczak started the third quarter with a sack to Timber Creek’s quarterback. Senior Haley Hadd blocked a touchdown with a leap to pull a flag, injuring her side. Players took a knee as the sports trainers assisted her to the sidelines. Boone called a timeout at the end of third quarter.

The Wolves scored a touchdown at the start of the fourth quarter. Junior Nyra Jolly completed a long pass in a nearly half-field play, with Taczak following up with an interception.

After a Boone timeout starting the fourth quarter, Hadd sacked Timber Creek #19. With 30 seconds on the clock Boone called a final timeout. The girls came up short at the end of the game, however, losing, 0-14.