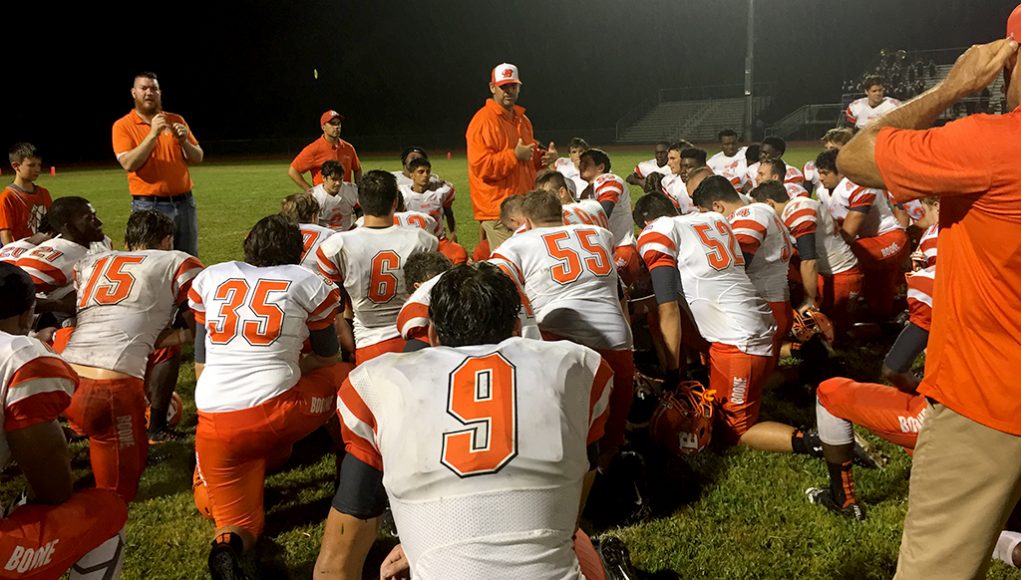 After training and practicing for months, the football team won 14-3 at their first regular season game against the Gateway Panthers.

This game was a defensive showdown the whole way, starting with high caliber defense from the Braves as they shut down the Panthers, forcing two consecutive three-and-outs on their first defensive possessions.

Senior Dai’One Creal and the offense tried to get things going, but after a 21-yard run for a first down, Creal fumbled the ball, returning possession to the opponent. However, big plays from senior James Swegheimer and junior Jacob Maddox kept the opposing offense at bay and the first quarter ended as it began, 0-0.

The Braves offense opened the second quarter with a drive deep into Panther’s territory featuring a speed option play between senior Jaxsen Anagnostis and Dai’One Creal. But on a fourth down conversion, the defense wrapped up Anagnostis in the backfield, leading to a turnover on downs. On the next drive, the Panthers marched up the field, moving into the red zone, but Jacob Maddox disrupted a third down conversion, forcing a field goal. With three minutes left to go in the half, the Braves offense moved quickly, using run and pass to get inside the opponent’s territory, where Anagnostis found senior R.J. Woodall on a deep 21-yard fade for the game’s first touchdown. At halftime, the Braves led 7-3.

With rain coming down overhead, the Panthers prepared for the kickoff to begin play again. They sent an onside kick to Boone’s return squad and came up with the ball, gaining possession to start the second half. The Panthers stalled, though, and made a special teams error of their own, fumbling the punt on fourth down and giving Boone great field position. They quickly took advantage, too, as Dai’One Creal took a run to the left and shrugged off a defender at the goal line for a 21-yard touchdown. The ball moved back and forth between teams, after unsuccessful possessions and the third quarter ended with the score at 14-3.

More shut-down defense from both teams kept the score the same for the rest of the game, as James Swegheimer proved his presence in the backfield swatting the ball and making a sack in the late stages of the game. Senior Jonathan De Lucca came in late in the fourth quarter to try to put the team up by two touchdowns, but his field goal attempt missed left. Following a dominant defensive performance from the away team, the Braves walked off the field with a 14-3 victory.

Dai’One Creal rushed for 131 yards and a touchdown and Jaxsen Anagnostis completed five of 11 pass attempts for 59 yards and a touchdown, but it was the defense that kept them in this game. Limiting Gateway to only 90 total yards of offense, key defensive players including James Swegheimer and Jacob Maddox dominated the game.

Support the football team in their home opener as they face Lake Nona on Sept. 1 at 7 p.m. on their new turf field.