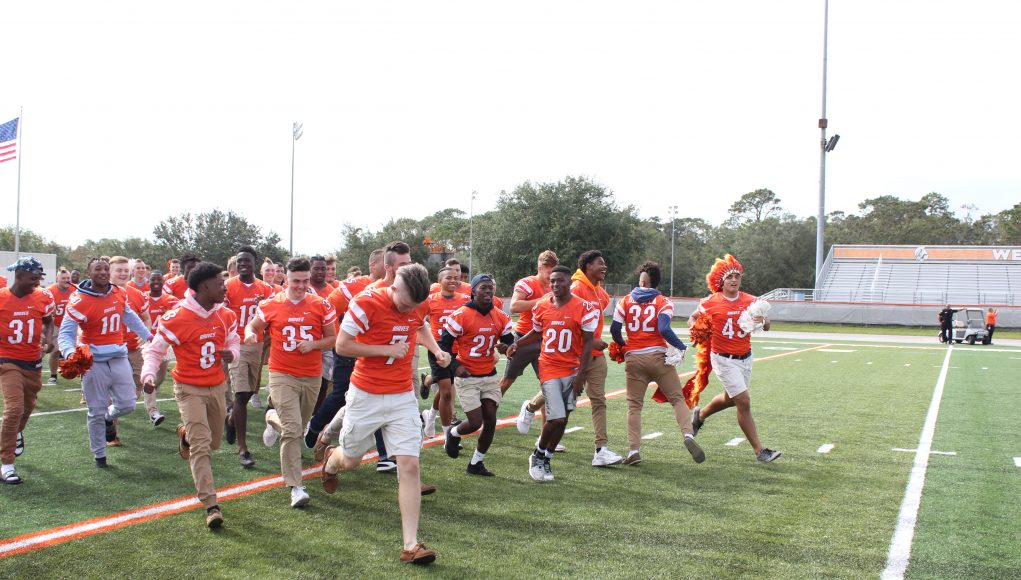 In preparation for the rivalry football game against Edgewater, classes brought their school spirit to the pep rally and fought for the school spirit barrel.

In addition to the Boone and Edgewater rivalry game barrel, they revealed a new “Boone” barrel at the pep rally. At the rally, the classes competed against one another for the brand-new barrel.

Aside from the new barrel, the pep rally was the first one in five years, so the event was new to all of the classes.

“What better time for one than the Edgewater game; both schools have great football records right now so it seemed like perfect timing,” varsity cheer coach Cynthia Hutsell said.

Hutsell, who has always thought of having a pep rally again, wanted to get all students involved.

“I think one of the best experiences for high school is the addition of school spirit. I have always had the idea tucked away and the senior class has never had anything like this before,” said Hutsell.

The classes competed against each other in three events. Representatives were picked from each class to participate. Each time a game was completed, the winning class would get one point added to their overall score.

“The best activities was the one where the three boys would change into the cheerleading outfit and sprint back and forth. That was by far the funniest event simply because of how of how comical it was,” senior Savion Jean-Pierre said.

The competition also took other factors into consideration like attendance throughout the week. In the end, the sophomore class won the competition.

“Even though we lost today, throughout this week in preparation for this rally and at the rally, the class of 2021 was able to really connect as a family,” freshman Emma Reed said.