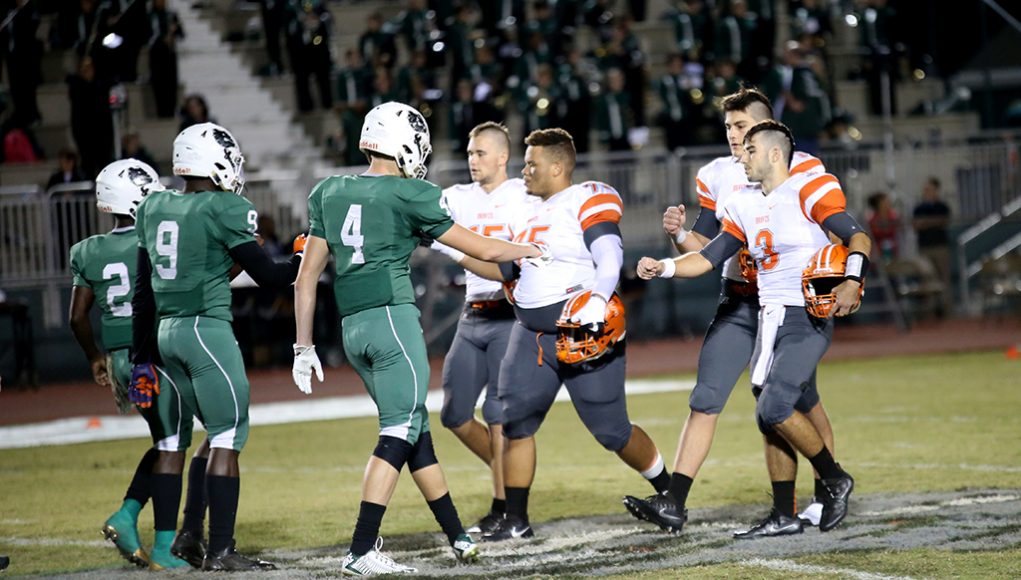 After missing the playoffs a year ago, the football team (8-2) entered their regional quarterfinal matchup against Flagler Palm Coast (9-0) with high hopes.

The Bulldogs started on offense and used their no-huddle offense to quickly move into opposing territory, but strong run defense stopped the drive and forced the home team to punt. However, the Braves couldn’t get anything going on offense, as an incomplete pass between seniors Jaxsen Anagnostis and Gene Nobles capped off a three-and-out.

The defense continued to shut down the offense, as seniors Jacob Bruno and James Swegheimer made tackles in the open field to end the drive quickly. Anagnostis carried the ball for five yards on the next drive and took a late hit penalty, extending the drive and moving the offense into Bulldog territory. Sophomore Christian Roberts carried the ball for 15 yards and hauled in a 17-yard pass on consecutive plays to move the Braves to the 3-yard line. From there, senior Dai’One Creal dashed in for a goal line touchdown run. After scoring first, the Braves led, 7-0.

On Palm Coast’s next drive, junior Naquan Baker made tackle for loss and Swegheimer knocked a ball down at the line of scrimmage to force the Bulldog’s third consecutive punt of the night. Roberts scampered for a 35-yard run, and Anagnostis kept it himself for 24 yards to end the first quarter. Through one quarter of playoff action, the Braves were ahead 7-0.

Picking up right where he left off, Anagnostis dove forward on a fourth-and-goal to score early in the second quarter, putting the Braves up 14-0 via the quarterback sneak. Again, the Bulldogs couldn’t score as they gave the ball back to the Braves but a stalled drive from the away team and a failed fake punt gave Flagler Palm Coast great field position midway through the second quarter.

However, the defense carried the team again, as James Swegheimer forced a fumble in the backfield and returned it for 73 yards for a defensive touchdown. After scoring three unanswered touchdowns, the Braves led 21-0. On the Bulldogs next drive, countless defensive penalties gave them far too many chances, and eventually the home team scored for the first time on a 3-yard touchdown run. A missed PAT brought the score to 21-6.

On offense, Creal continued to run hard, picking up two consecutive first downs on the ground. Anagnostis threw an interception, though, on a deep pass attempt to Nobles and the FPC offense took over. Swegheimer picked up the slack again, intercepting the ball at the line of scrimmage and returning it 50 yards for his second defensive touchdown. At halftime, the Braves held a commanding 28-6 lead over Flagler Palm Coast.

The story of the second half for the away team was defending their lead. After a three-and-out on their first drive, the Braves had to hold on defense. A deep pass brought the Bulldogs right outside the red zone and they punched it in on a 21-yard touchdown run to cut into the lead as they trailed Boone, 28-13.

After some pace and momentum on offense, the Braves turned the ball over on a fumbled speed option play. The Bulldogs picked up right where they left off, running the ball quickly and efficiently, but stalled in the red zone and faced a fourth down conversion. Senior Devonte Booker stood tall on the run play and forced an important turnover on downs. The offense pieced together some runs, but on the last play of the third quarter, Anagnostis was stopped short of a first down and the Braves faced a punt. Through three quarters, Boone led Palm Coast, 28-13.

The run continued to work for the Bulldogs, but defensive pressure from Swegheimer on third down forced a fourth-and-long situation. Again, the defense held strong on fourth down, forcing another turnover on downs with nine minutes remaining in the game. The next drive for the Braves was a decisive one, as a short pass to Roberts and a first down run from Creal kept the chains moving and the clock rolling. In the red zone with two minutes remaining, the offense faced a tough decision on fourth down. Coach Johnson elected to bring in senior Jonathan De Lucca for the field goal, but the kicker was unable to convert, kicking into the wind.

Down two scores with two minutes remaining, the Bulldogs offense returned to the field. They moved methodically down the field, but a sack from senior Carver Reeves slowed the drive down. With time quickly winding down, Flagler Palm Coast tried to put some points on the board, but couldn’t make it happen and after a defensive stand, the game concluded with the Braves on top.

Boone came out victorious in the regional quarterfinals for their first playoff victory since 2008 when they beat Royal Palm Beach in the Class 6A regional finals.

The team will play at Wekiva High School on Friday for the regional semifinals.