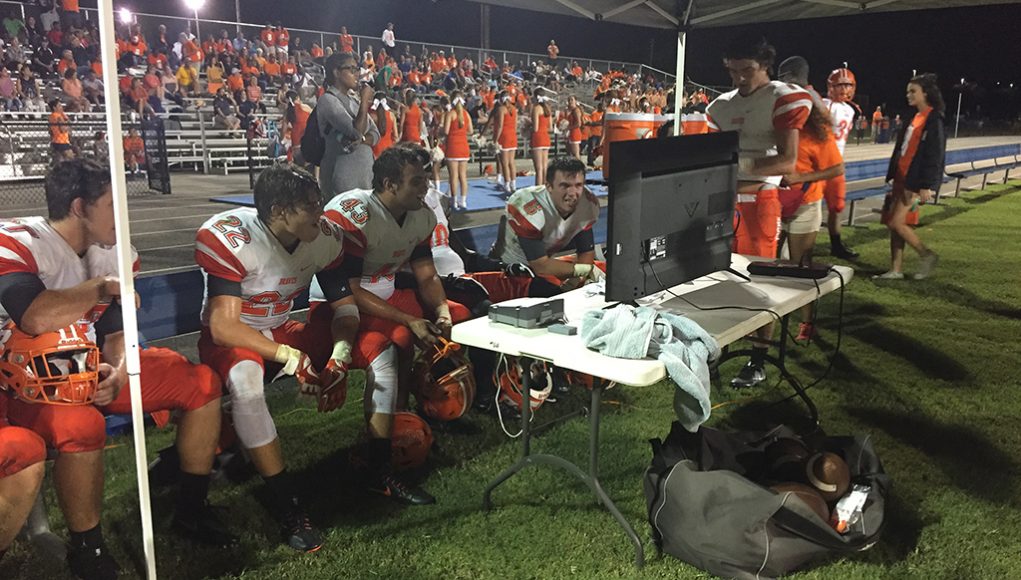 Going into a game against the Apopka Blue Darters (2-1) on Friday, Sept. 22, the football team (2-1) anticipated a tough fight. In the end, the team experienced their first season loss, 10-21.

The team received the first half kickoff, starting the game with senior Dai’One Creal running for a first down. However, the offense stalled after that and had to punt after a quick possession. A quick Apopka run cut its way into Boone territory, but seniors James Swegheimer and Alex Chuilli made key stops to force another punt.

The offense continued to struggle, going three and out on their second series. Swegheimer forced a fumble and came up with the ball, returning possession to the offense. The offense couldn’t do anything with the newfound momentum, failing to gain a first down for the second straight possession. On their next series, the Blue Darters popped off a 22-yard run on a third and long to end the first quarter. Through one quarter of action, the score was still 0-0.

Less than a minute into the second quarter, Apopka put the first points on the scoreboard with an 11-yard touchdown pass. A two-point conversion put the home team up, 0-8. On the ensuing kickoff, senior Jack Dixson returned the ball 75 yards for a touchdown but the play was called back on a block in the back penalty. The offense stalled and senior Aaron Holton had to punt the ball away. Dixson intercepted the ball on the next drive and returned it into Apopka territory. Boone offense took advantage of the field positioning, sending senior Jonathan De Lucca on to kick a 48-yard field goal. The defense continued to battle, forcing another fumble that senior Jacob Maddox recovered. After two inefficient plays, senior Jaxsen Anagnostis faced some pressure in the backfield and had to throw the ball away, bringing the punt team up as the second quarter winded down. At halftime, the team trailed, 3-8.

After gathering to strategize at halftime, the team’s offense still struggled. Apopka struck on a two-yard run to increase their lead to 3-14 at the end of the third quarter.

The offense went for a fourth down conversion and came up with it on a complete pass from Anagnostis to junior Owen Connell. After another unsuccessful three plays, the team faced another fourth down and could not convert this time. After some shifty passes and run play calling, the Blue Darters made use of good field positioning and scored on a ten-yard run to go up 3-21. The offense picked up the pace on the next drive as sophomore Christian Roberts rushed for 34 yards into the red zone. The team elected to go for it on fourth down, with a pass to senior RJ Woodall, but failed to convert, turning the ball over on downs in opposing territory. The defense quickly gave the ball back, forcing the fourth fumble of the game near the Apopka 30-yard line.

On the following play, Dai’One Creal ran untouched for a ten-yard touchdown, cutting the team deficit to eleven. The score was now 10-21. The Blue Darters elected to wind the clock down, and walked off the field with a 10-21 home victory over the team.

The football team’s next game is the homecoming game on Thursday, Oct. 5 at 7 p.m. against Freedom.