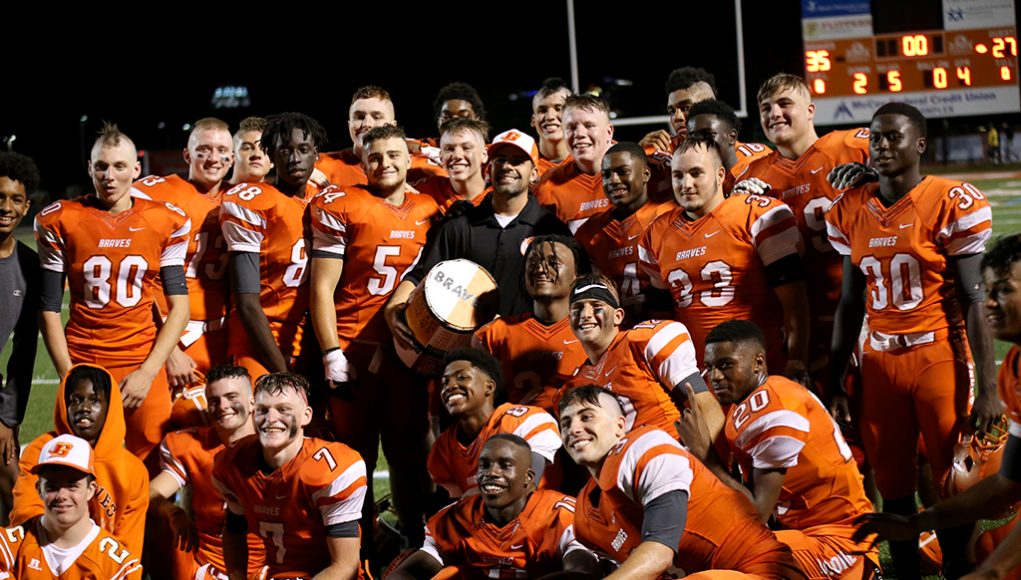 With playoff hopes on the line and bragging rights associated with the Battle of the Barrel, the Boone Braves (8-2) and the Edgewater Eagles (8-2) met on the Reservation for their 66th rivalry matchup.

The Braves won the coin toss and elected to defer, giving the Eagles possession to start out the game. The defense quickly took hold of the game, as junior Jacob Maddox intercepted a pass on the first drive and returned it to the red zone. On only their second play from scrimmage, senior Dai’One Creal ran untouched for a 19-yard score and the home team quickly led 7-0.

The defense kept up the momentum on their second drive as Maddox intercepted a pass for the second time in the first quarter setting up the Braves with great field position again. However, this time the offense could not capitalize, as they decided to go for a fake field goal on fourth down that did not get the necessary yardage.

After forcing a turnover on downs, the Eagles moved quickly on offense, carrying the ball for 45 yards down to the goal line, and punching it in for a 1-yard score on the subsequent play. The game was now tied at 7-7. On the next drive, though, Creal kept up his strong half, brushing off several defenders en route to a 55-yard touchdown run. The Braves now led, 14-7 and that score remained for the rest of the first quarter.

The offense started the second quarter failing to convert on third down, bringing on the punt team. The Eagles quickly got back to the running game, using a 20-yard run to bring the ball inside the red zone. They continued to roll, scoring on a 9-yard touchdown carry, tying the game at 14-14 early in the second quarter.

The Boone offense tried to rebound with a mix of pass and run, but on third-and-long, senior Jaxsen Anagnostis looked to pass to sophomore Christian Roberts, but the running back was unable to catch the ball, forcing a punt. The Eagles offense kept up the pressure, using a deep pass and a long run, to strike within the red zone. They executed from there for the third time, scoring on an 11-yard QB keeper to take their first lead of the game. The Boone offense tried to cut into the deficit with a field goal late in the first half, but senior Jonathan De Lucca was unable to convert, and the home team trailed 14-21 at halftime.

The home team started with possession in the second half, trailing by a touchdown. Anagnostis executed the QB sneak for a short third-down conversion, but the offense stalled, bringing on the punt team. On the Eagles first offensive possession, they used a swift passing game and a key fourth-down conversion to bring the ball within the 10-yard line. From there, the quarterback kept it on the ground and muscled through defenders for a 3-yard touchdown. A blocked PAT brought the score to 14-27. The Braves ended the third quarter with possession, as Anagnostis completed a screen pass to freshman Parker St. John.

The offense maintained their speed in the fourth quarter, as Anagnostis kept the ball on the speed option for a huge fourth down conversion. Now inside the red zone, Creal dashed for a 10-yard score, and his third of the game, to cut their deficit to 21-27. The defense fueled off the revitalized home crowd, as seniors Carver Reeves and Alex Chuilli teamed up for a clutch third-down tackle, forcing Edgewater to punt with 7:16 remaining. Creal picked up right where he left off, gashing the defense for a 25-yard carry. However, a delay of game penalty set the offense up with a third-and-long that they couldn’t convert, forcing a punt with little time remaining.

Junior Trent Bivens made a huge play on third down to sack the Eagles quarterback and bring up a long third down. An incomplete pass on the next play brought on the punt team and the offense took over with 2:09 remaining and 50 yards to cover for a score.

Three inefficient plays on offense brought up a fourth-and-7 from the Edgewater 40-yard line. Anagnostis heaved the ball deep to senior Gene Nobles who went up and made the catch in traffic for a thirty-yard gain, bringing the ball to the 3-yard line. From there, Creal was able to take the ball three yards for his fourth score of the game, and the home team led 28-27 with 1:39 remaining.

On the Eagles next possession, senior Jack Dixson intercepted the ball and took it in for the score, putting the Braves up 35-27 with 38 seconds to go. After that, a big sack from Reeves sealed the victory, and arguably one of the greatest finishes of the 66 years of this rivalry.

“It was too electric,” Creal said of the atmosphere and the home crowd. “We’re undefeated on the turf so we came out, executed and got the win.”

The Braves sealed their playoff spot, but the official opponent and location will be released today when FHSAA releases the playoff bracket.

“We just really feel like we can’t come out flat and if we come out ready to play, we don’t feel like [any] team can beat us,” Creal said.

The senior running back rushed for 196 yards and 4 touchdowns, capping off a regular season in which he totaled 1,213 rushing yards and 9 touchdowns.

Click here to view a photo gallery from the game.