Tagged with " Light in August"

In Chapter 11, Joanna tells Christmas the story of her family. Abolitionists with New England roots, the Burdens are tolerated but never accepted in Jefferson. Joanna’s grandfather Calvin and his namesake, her half-brother also named Calvin, are shot to death by Colonel Sartoris “over a question of negro voting.” Joanna is the only surviving member of the Burden family in Jefferson when Christmas arrives. 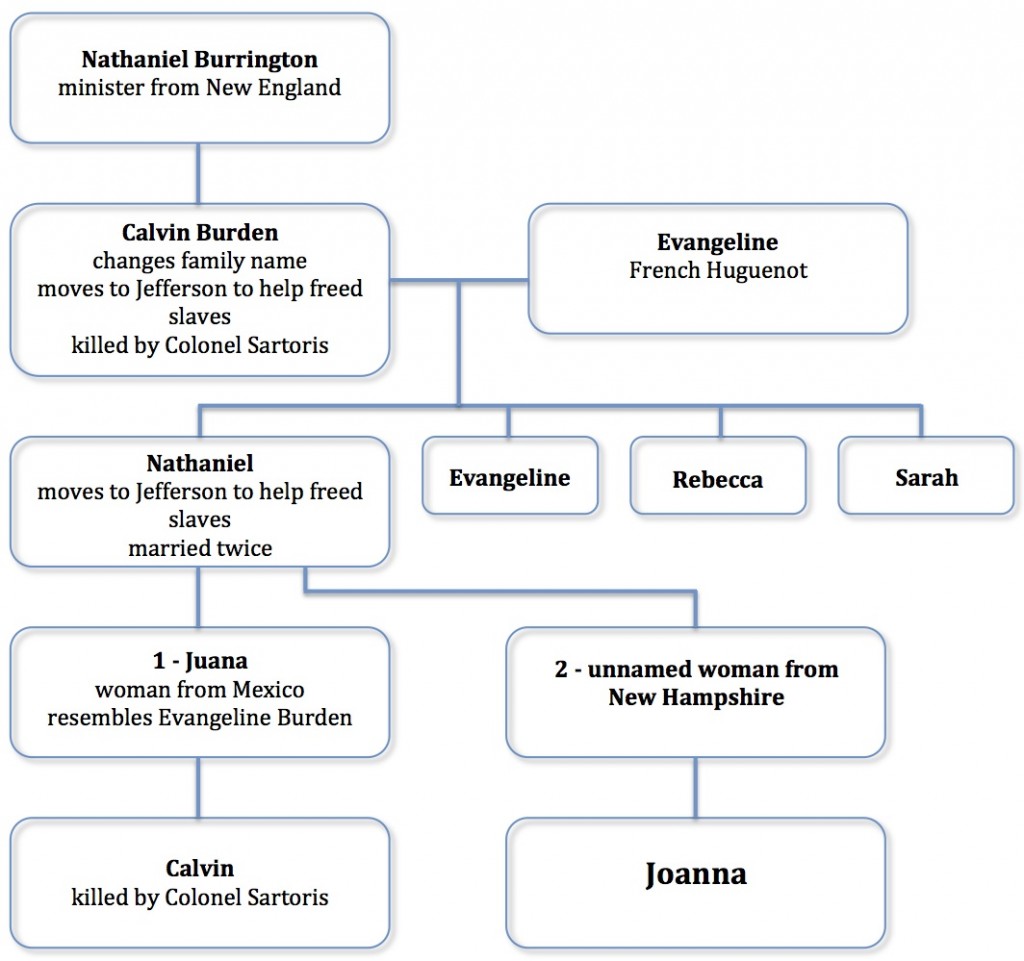 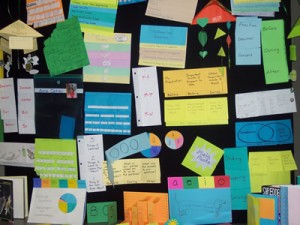 Foldables (as anyone who’s ever has Mrs. Parm for a class would know) can prove to be a very helpful study aid. We’ll be using a simple foldable to collect textual support for your seminar on Light in August.

First, consider some of the motifs Faulkner has been tracing throughout the novel. Obviously, race is a primary motif—how the races interact, what the common attitudes were at the time, how different characters react to questions of race, etc. Next, there is isolation. In what ways are the characters isolated from others? From the larger Jefferson community? Is this isolation self-selected or imposed upon them? Identity forms a core idea in the novel. How the characters identify themselves, or push against the identities placed on them by others, reveals much about their choices and actions. Finally, as in much of Faulkner, there is the role of religion. How does religion—the moral expectations of practitioners, the language, and its traditions—impact the morals, choices, and viewpoints of the characters?

The foldable will help you gather evidence about these motifs and help you create strong questions to use in our seminar when we conclude our study of Light in August. Create your foldable this way:

Former Orlando Sentinel Books Editor Nancy Pate described William Faulkner’s Yoknapatawpha County as “[a] fictional landscape…peopled by rogues and rednecks, farmers and townsfolk, descendants of soldiers, slaves and carpetbaggers. There are whites, blacks, mulattos, people of all ages. They have names like Snopes and Sutpen, Compson and Bundren, Sartoris and Varner, Benbow and McCaslin. They live on old plantations and tenant farms,  in small hamlets and crossroads smaller still. Their stories–many of them intertwining–make up what Faulkner called ‘the tragic fable of Southern history.'” 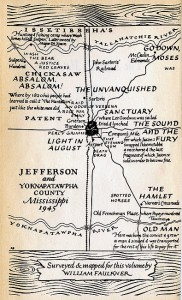 Much like English novelist Thomas Hardy, whose “Wessex” is a fictional amalgam of real locations, Faulkner based Yoknapatawpha County on very real places. Faulkner lived for most of his life in Oxford, Mississippi. In Faulkner’s work, Oxford becomes the town of Jefferson, while the real Jefferson County is named “Yoknapatawpha” after the old Chickasaw word for the Yocona River south of town. The county is located in north central Mississippi not far from the Tennessee border. This 1947 map indicates the primary locations of several of Faulkner’s major works, including not only Light in August but also his masterworks Absalom, Absalom! and The Sound and the Fury. 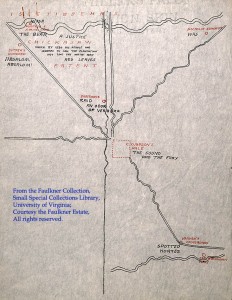 The second map, probably drawn in 1947 for Malcolm Cowley’s Portable Faulkner, is just one of a series that Faulkner created for each of his works. Characters, events, and locations in one work often make appearances in another. As such, many of the maps contain references not only to the current work, but other works that might have connections to it.

The past is never dead. It’s not even past.
–William Faulkner, Requiem for a Nun 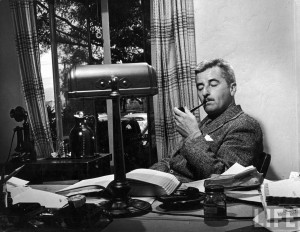 Nobel Prize-winning author William Faulkner is one of the best-known of Southern writers, if not the preeminent one. His rich and evocative writing style is unparalleled and very different from many of his contemporaries, most notably Ernest Hemingway. Where Hemingway is spare, direct, and laconic, Faulkner is lush, meandering, and protracted. One famous Faulkner sentence, located in the middle of Absalom, Absalom!, runs for 1,288 words. In that sense, Faulkner’s writing is much like the South he loved and sought to preserve on the page: a complicated, tangled mixture of the lyrical and the everyday.

Faulkner was born in Mississippi in 1897. He began writing as a young man. When World War I broke out, Faulkner attempted to enlist in the Army, but his age and height (he was only 5’5-1/2″) kept him out. Undaunted, Faulkner went to Canada to enlist in the British Royal Flying Corps. Despite never actually serving, he was fond of wearing his uniform and carrying the swagger stick he’d been issued. Soon after, he moved to New Orleans to begin his writing career. His first novel, Soldier’s Pay, was published in 1925. Apart from this brief period in New Orleans, occasional stints as a Hollywood screenwriter in the late 1930s and early 1940s, and as a writer in residence at the University of Virginia in the 1950s, he primarily lived and worked in his hometown of Oxford, Mississippi. He once remarked, “I discovered my own little postage stamp of native soil was worth writing about and that I would never live long enough to exhaust it.”

He was right. His interwoven collection of short stories and novels focused on his own back yard. Lafayette County became the fabled, fictional Yoknapatawpha County, whose families, history, and tales reflected both the high-minded ideals of the mythical South and the tangled, messy actualities of a region marked by pride, poverty, social status, and segregation. 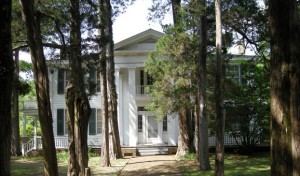 Rowan Oak, Faulkner’s home, is now owned and operated as a museum by the University of Mississippi. The house is preserved much as it was in Faulkner’s day. His Underwood typewriter sits ready on a desk, while riding boots rest on the floor next to a chair. A full outline and story notes for one of his last published works, A Fable, are penciled across the walls of his study. Faulkner’s connection to this house was legendary. One story goes that during one of Faulkner’s screenwriting jobs, the studio put him in an office and left him to work. After some time passed without much output, Faulkner said he thought he could write better from home, and the studio agreed. More time passed without any production, so the studio sent someone to Faulkner’s temporary California apartment—and he wasn’t there. When he asked to write from home, he meant Rowan Oak. They called and sure enough, Faulkner was in Mississippi, proving what he wrote for The Paris Review in 1956: “An artist is a creature driven by demons. He don’t know why they choose him and he’s usually too busy to wonder why. He is completely amoral in that he will rob, borrow, beg, or steal from anybody and everybody to get the work done.”

Faulkner’s life was marked by excesses—his concentration on his work, his home, his alcohol consumption (he did not drink while writing but often binged afterward). He won the Pulitzer Prize for fiction in both 1955 and posthumously in 1963, and was awarded the Nobel Prize for Literature for his body of work in 1949. In his acceptance speech he remarked, “I feel that this award was not made to me as a man, but to my work—a life’s work in the agony and sweat of the human spirit, not for glory and least of all for profit, but to create out of the materials of the human spirit something which did not exist before. So this award is only mine in trust.” Hear a clip of his acceptance speech here.

Faulkner’s techniques, including his exploration of stream-of-consciousness writing, his invented verbiage, and his convoluted timelines, have earned him a permanent place near the top of the Southern literary tradition. Flannery O’Connor, another celebrated Southern author, stated that “the presence alone of Faulkner in our midst makes a great difference in what the writer can and cannot permit himself to do. Nobody wants his mule and wagon stalled on the same track the Dixie Limited is roaring down.”

For all kinds of great Faulkner resources, visit William Faulkner on the Web, hosted by the University of Mississippi.

“William Faulkner’s Hollywood Odyssey,” by John Maroney about Faulkner’s screenwriting days, was published in Garden and Gun magazine in 2014. Read it here.