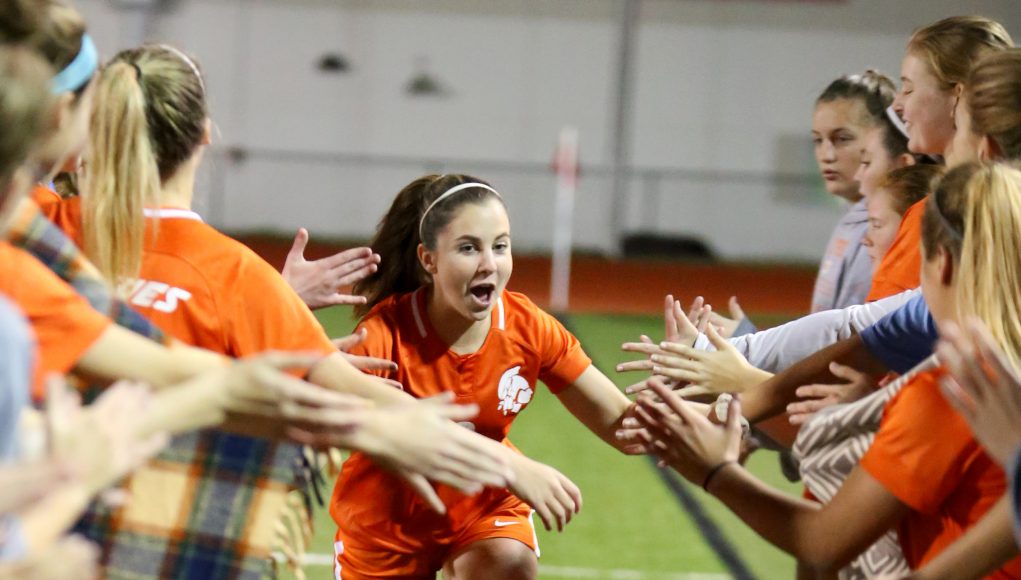 The Lady Braves soccer team (8-0-1) played their first home game of the season on Tuesday against the University Cougars (2-0-6).

At the start of the game, the girls showed they were going to be a tough team to beat. Senior Cynthia Bagozzi ran toward the goal and took a shot, but the Cougars’ goalie deflected the ball out of bounds leading to a Boone corner kick. Junior Alexys Morton took the corner kick and senior Emily Riggs scored the first goal of the game, 1-0. Right after the goal, the Cougars obtained possession of the ball and made a dash down the field. However, senior Alexis Tamvakis stopped the advancement by clearing the ball out of bounds. The Braves quickly gained back possession of the ball. Bagozzi crossed from the left side of the field to right forward senior Taylor Wolfinger, who proceeded to score a goal, 2-0. With a couple minutes before the first water break, Bagozzi passed her second assist of the night to senior Sarah O’Mahony. O’Mahony scored a goal, 3-0.

After water break, the team made it difficult for the Cougars to get the ball to the other side of the field. The Lady Braves’ defenders put enough pressure on the offense and as a result, the Cougar offenders kicked the ball out of bounds.

Sophomore Helena Koroshetz threw the ball in to Caitlyn Alexander. Alexander switched the ball to the other side of the field by passing it to Bagozzi. Baggozi then helped with a goal, made by O’Mahony, 4-0. Taking the ball away from the Cougars, junior Addison Marlett made a goal from outside the box, 5-0.

At halftime, the girls were leading, 5-0. In their huddle, Coach Derrick Smith told the girls no one was allowed to score a goal unless it is one made by Alexander.

The second half of the game started out slow. The Cougars put more pressure on the Braves. The Braves could not improve their score and at water break, the score remained 5-0.

Trying to improve their already ahead score, Marlett advanced down the field and attempted to make a cross to Alexander, but the ball went out of bounds. The Cougars took the throw in, but Bagozzi stole the ball and crossed it. Alexander received the cross and made the goal, 6-0. Following this, freshman Aleksandra Fekany and Morton both scored goals, ending the game 8-0.