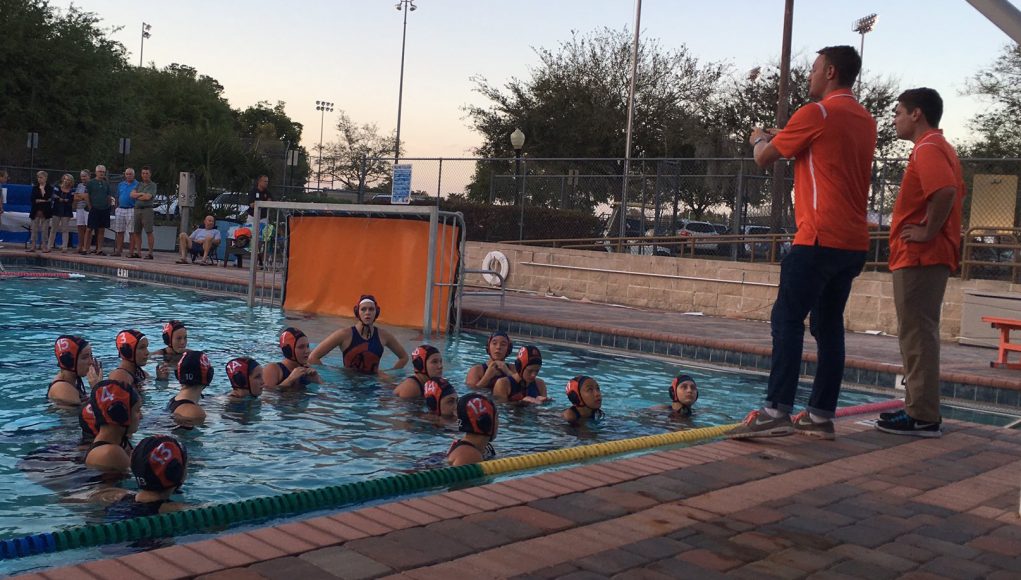 In celebration of their Senior Night, the girls and boys water polo teams drowned the University Cougars in a surplus of goals.

The Lady Braves took the lead with senior Cardinal Hastings hitting the back of the net four times. The Cougars tried to retaliate, but goalkeeper Chloe Conyers, junior, made the save. The Cougar goalkeeper stopped senior Kaitlyn Blem’s shot, but Molly Houston, senior, got the rebound and scored. The girls ended the first quarter with a shut out, 6-0.

Attempting a comeback to begin the second quarter, the Cougars slipped three goals past Conyers. Hastings replied with a successful shot from the half-line. Another shot hit the post, and the Cougars scored on a counterattack. Conyers stoped the Cougars’ fifth attempt at goal and sent the ball to junior Abigail Smith, who scored, ending the half in the lead, 9-4.

After hitting the crossbar twice, Hastings hit her mark. Soon after, sophomore Holly Arquette snuck in her first goal of the game. Successive goals from Houston, Hastings, Conyers and Grace McGee, junior, widened the score gap. The Lady Braves ended the third quarter 16-4.

Houston kicked off the fourth quarter with a goal, but the Cougars quickly scored too. Sophomore Amanda Smith stole the ball on a Cougar counterattack and scored. Conyers made a diving save, but the Cougars scored on their second attempt. The girls ended 19-6.

After a small ceremony of senior recognition for both teams, the boys began their game. The Cougar goalkeeper deflected several shots before senior Samuel Gentry Mickelson scored two back-to-back goals. Goalkeeper Micah Kinney, senior, made his first stop of the night, and allowed senior Andy Hoogvorst to drive down the middle and score. Gentry Mickelson followed up with four goals of his own. Hoogvorst hit the crossbar, but senior Ryan Paule scored on the deflection, ending the first quarter 9-0.

Gentry Mickelson opened the second half with a goal. He and Paule each made a shot on goal, but both hit the post. Then, the Cougars scored. Paule later scored off Gentry Mickelson’s assist. To match the point, a Cougar scored on goalkeeper Ivan Mihanovic, freshman. Moore countered with a goal. Hoogvorst shot and hit the post, but quickly recovered and scored. The third quarter ended at 23-8.

Come support the girls and boys water polo teams tomorrow, March 14, at 6 p.m. and 7 p.m., respectively, as they take on the Freedom Patriots.